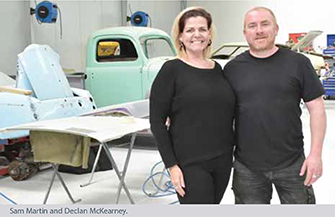 We meet husband and wife team Declan McKearney, manager of the Resto's and Rods business, and Samantha Martin, the executive producer of their Resto My Ride TV show. "Dec and Sam" are one of the most dynamic and committed partnerships you are likely to find in the car restoration industry.

It all began in 1995 for a young Declan McKearney in Newry, a picturesque town in the south east of Northern Ireland, where he began his panel beating apprenticeship over a threeyear period. But his was no ordinary apprenticeship, as during that time McKearney travelled to Canada, worked as a coachbuilder, building stretch limos and even opened his own panel shop – all before he was a qualified tradesman.

However, seeking broader opportunities, he joined the Brit exodus and headed to Australia, arriving into Sydney on New Year’s Eve 2005, en route to Melbourne. After a chance encounter (in a local pub), he visited Carey Miller of Superior Panels in Clifton Hill – just to take a look. He landed a job as a panel beater there and stayed for a number of years. Coincidentally, it was here that he met a young Carmine De Maria, and they got to know each other very well.

McKearney also contracted within the industry for a number of years until he decided it was time to open his own shop – and in 2015, Bodymaster Prestige Paint and Panel opened its doors in Williamstown, Melbourne. “This was always a means to an end as I had seen how the industry in the UK had gone through several changes and the signs were ominous for the Australian collision repair industry. My focus was always on the restoration sector and within 18 months, we were no longer doing collision work.”

Where are they now?

The business was rebranded to become Resto’s and Rods to better reflect what they do and, in true entrepreneurial spirit, Martin and McKearney have expanded their business interests and now have Resto My Ride, an Australian car restoration TV show.

Arguably the most well-known restoration project was “An EJ for EJ” in support of the EJ Whitten
Foundation, which sold at auction for an Australian record for an EJ Holden. However, they have also completed a number of high-profile projects, including a fully restored HR wagon for multi-talented celebrity Andrew Daddo, which was revealed at MotorEx in May this year. 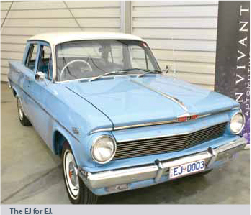 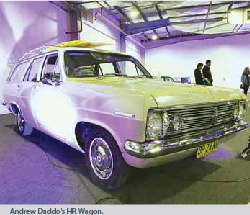 “We watched a plethora of American car restoration shows and thought: ‘why not do this here?’” said Martin. The Australian restoration market is nowhere near as significant as the American scene and without strong support it was always going to be an uphill battle. After all, many had tried before and failed. However, a solid understanding of the trends in the automotive industry, combined with typical Northern Irish tenacity and Martin’s obvious marketing capabilities, the production company is now up and running.

Resto My Ride is currently in production of its first season and has been a real experience, particularly as the Resto and Rods business still needs to function as a separate business entity. “Producing the show is a major disruption to the workshop, but we really believe in the synergistic effect on both businesses,” said Martin.

“Fundamentally, we take pride in everything we do, from working with the client to ensure we are on the same page right from the outset, to the quality of the final result. I will not compromise my brand,” said McKearney.

Resto’s and Rods has relied on the support of several key suppliers, from 3M, about whom they could not speak more highly, Hare and Forbes machinery and MN Spray Booths, whom they chose for their committment to “deliver as promised”.

And just when you thought this couple had enough on their plate, it’s worth pointing out that Martin is a volunteer director of Variety Australia.

“Our mission is to empower Aussie kids who are facing challenges with sickness, disadvantage or through living with a disability to reach their full potential and realise their dreams.”

Where to from here?

Although the restoration business and the TV show run as separate commercial ventures, they are inextricably linked. Resto My Ride is a vehicle to drive interest in, and demand for, McKearney’s high quality restorations, and (obviously) without his high-quality end product there would be no TV show. “It’s a symbiotic relationship,” said Martin.

With Series One of Resto My Ride expected to be completed by Easter next year, they are already working on Series Two and The Discovery Channel will take the series to air later next year.

Regarding Resto’s and Rods: “Restoration work requires much more space than collision repair work for various reasons, particularly that the car is in the shop for significantly longer AND we have it stripped down completely. Ideally, I could see us doubling the footprint over the next couple of years,” said McKearney. However, because each project requires McKearney’s personal stamp, there is a limit on how many cars they can do.

It is clear that restoration work is both physically and emotionally demanding, but McKearney summed it all up on one sentence: “People live for Fridays – I live for results.” 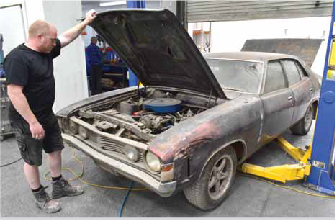 To find out more about this “dynamic duo” visit www.restosandrods.com.au