McLaughlin has won the opening race of the Darwin SuperSprint at Hidden Valley Raceway today, taking his Supercars career race wins to 49. Coulthard also put in a solid performance moving up four places from his starting position to finish in the top 10.

Both Shell V-Power Racing Team drivers made it through the two qualifying sessions and into the Top 15 Shootout. McLaughlin came within 0.06 seconds of Whincup’s time, placing him second quickest. Coulthard struggled with balance during his lap and was only good enough for P14.

With only Dunlop soft tyre compounds allocated by Supercars, tyre choice was not an issue for Race 16. Starting on the clean line, McLaughlin moved straight into P1 off the line and into the first turn. Coulthard also had a strong start and charged up six places on the opening lap.

On lap 8, McLaughlin made his compulsory stop and after saving tyres earlier in Qualifying, had two green tyres fitted to the rear of his Mustang. Rival Whincup responded and stopped one lap later, but McLaughlin was able to stay ahead when he re-joined the race. Coulthard also pitted early, coming in for his stop on lap 11. He took on two tyres on the right-hand side of his car.

Coulthard showed solid pace following his stop, making up ground and getting past the Walkinshaw Commodore of Fullwood. With 15 laps remaining, Coulthard was wedged between Holdsworth and Percat, but Percat had pace and was able to move past. DePasquale was also able to make a move on Coulthard one lap later.

In the closing stages of the race, Mostert made contact with the No. 12 Mustang as he made his way past, leaving Coulthard to try and fend off van Gisbergen who passed him on the last corner. McLaughlin comfortably won the 38-lap sprint race while Coulthard added another top 10 result to his resume, finish in P10. 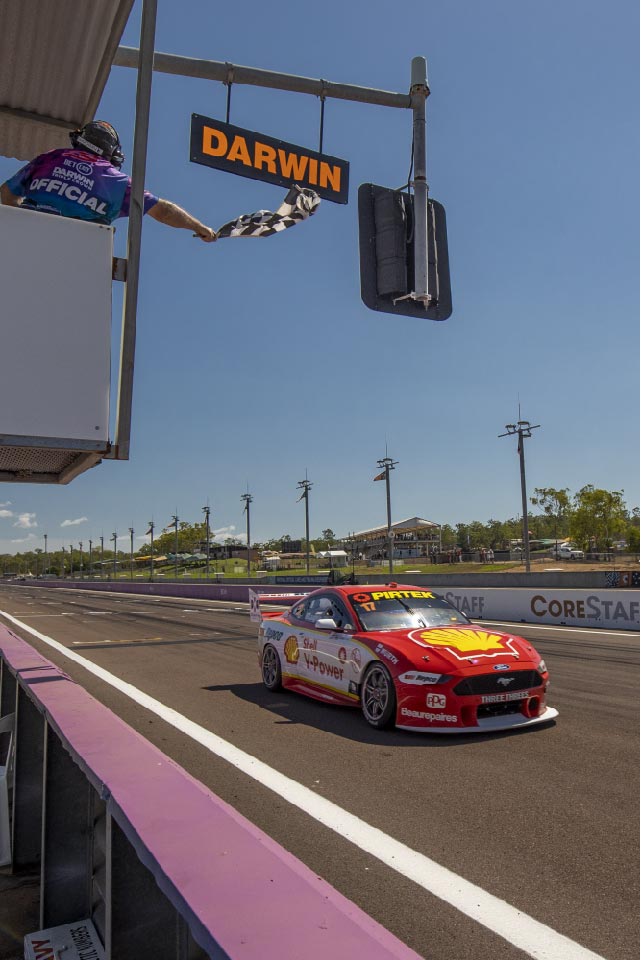 Coulthard commented, “Qualifying and my shootout lap set me up for a tough day, so I only have myself to blame. I was kicking myself for that and stated 14th.”

“I got to P8 in the opening lap of the race which was good, but then we just got stuck behind some slower guys, and I wasn’t able to pass. Our strategy was to go long, but just got dragged back too much in that first stint.”

“We pitted early, which was against what we wanted to do, and then I caught up to the back of another competitor and got dragged back again. Getting dragged back meant people behind me could catch me and pass me because they had better tyres because they pitted later.”

“But earlier in the day we were going well – practice and the first qualifying session, but just couldn't put it together in the shootout.”

McLaughlin added, “The start of the race was really pivotal to be able to get in front of Jamie and into P1, because I was able to do my own race from then on.”

“The boy’s pitstop was unbelievable, really fast, and I was so proud of them. They’ve been working hard and today’s race was a nice start to the weekend.”

“My car was really strong throughout the run, and I was happy with the way that it just continued to do the same pace lap-after-lap. It was a good start to the weekend, so I’m pretty happy.” 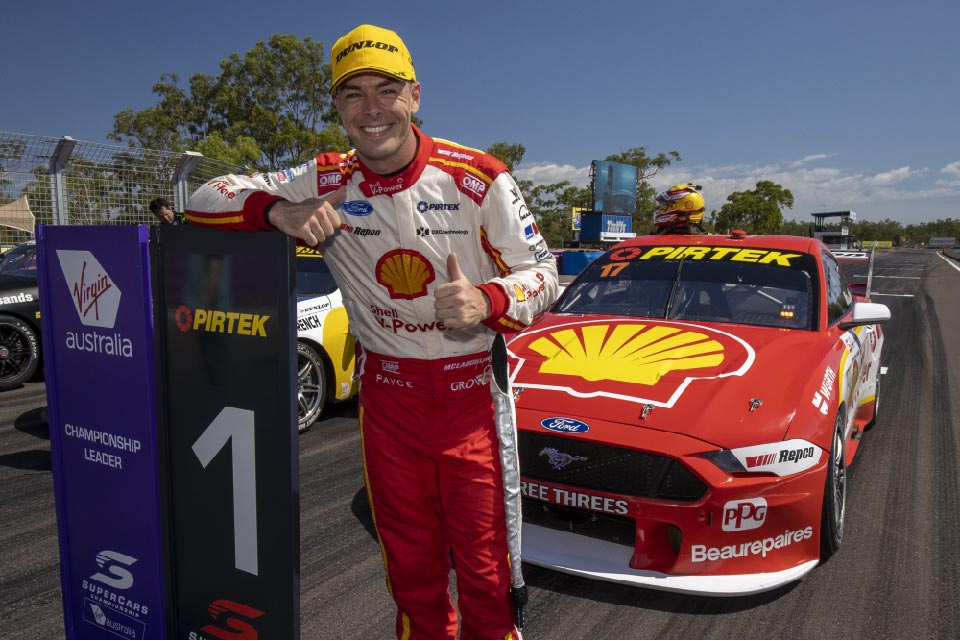 McLaughlin led from start to finish claiming his 50th Supercars race win. Teammate Coulthard narrowly missed out on a podium and finished in P4.

McLaughlin set himself up well in this morning’s qualifying session, clocking a time of 1m6.2585 which put him on pole. Coulthard started Race 17 just two rows back in P6.

McLaughlin had a blinding start to the 38-lap sprint and was able to hold his position ahead of rival van Gisbergen who started next to him on the grid. But it was Coulthard who was most impressive off the line - he blazed from P6, around the outside of the field, and slotted into P3 at the first corner. 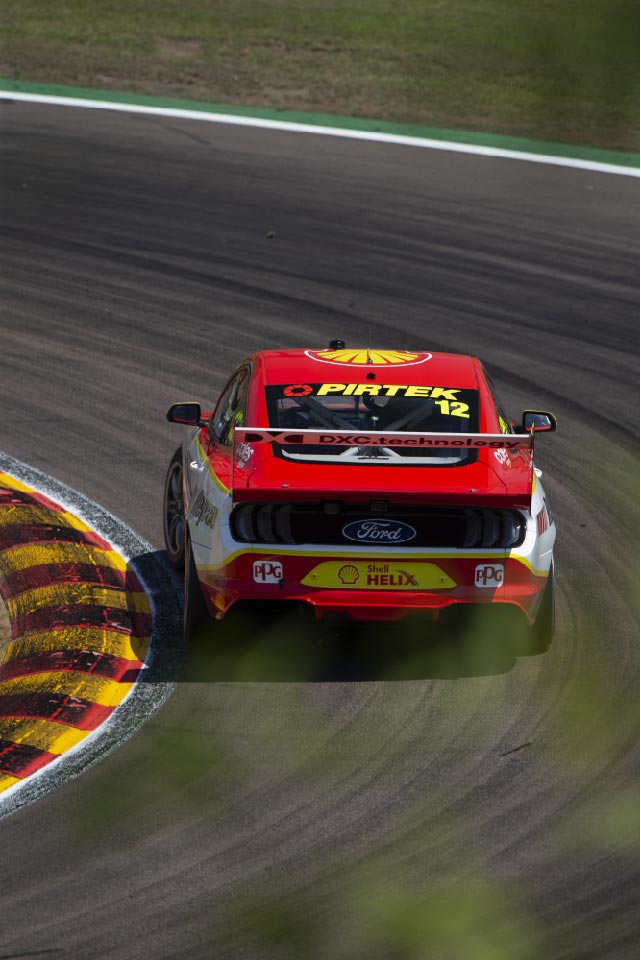 Coulthard was the first of the Shell V-Power Racing Team Mustangs to stop in an attempt to undercut van Gisbergen and gain track position. He did this on lap 6 and took on two tyres. Two laps later, McLaughlin made his compulsory stop. Having saved green tyres earlier in the day, he had an advantage over his closest rivals who were swapping to premarked tyres. McLaughlin re-joined the race still ahead of van Gisbergen, but Coulthard remained in P3 behind them both.

Having run a long first stint, Pye was the last car in the field to pit, and while timing showed he could threaten to overtake Coulthard when he re-joined the race, he came out 2-seconds behind him. But Pye’s pace was good on fresh tyres, and with 8 laps to go, Pye was closing in on the No. 12 Ford Mustang. He made his move on lap 29, relegating Coulthard out of podium contention.

By the final lap, McLaughlin had opened the gap to van Gisbergen by more than 9 seconds, and he cruised home to take his second win of the weekend. Coulthard finished in P4. 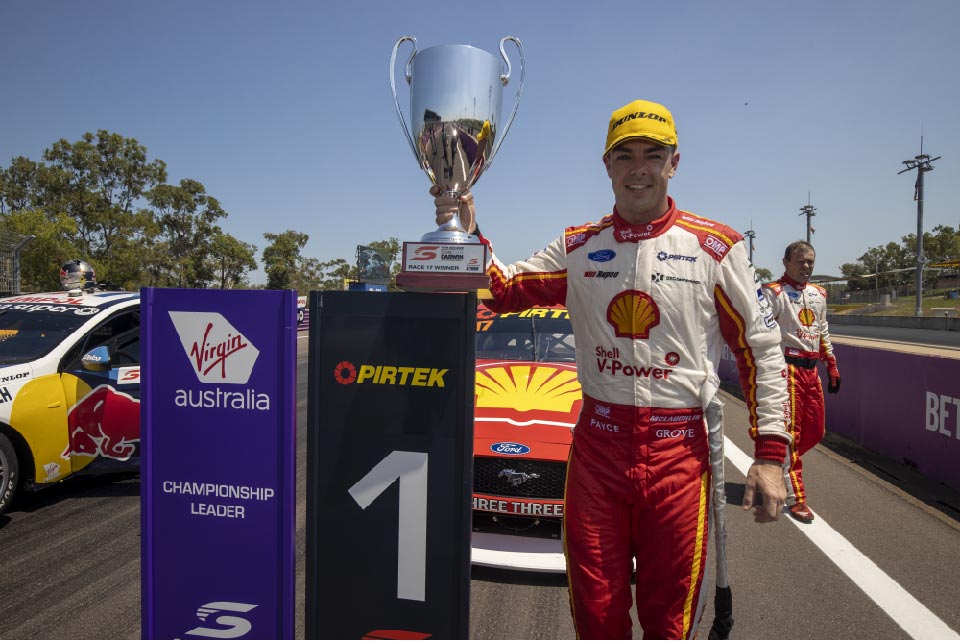 McLaughlin claimed his third race win of the weekend in Race 18, while Coulthard, despite a post-race time penalty, made up five places to finish in P11.

In qualifying for Race 18, McLaughlin’s lap time was fast, but he missed a second pole position by 0.03 seconds and started from P2. A small lockup during his lap cost Coulthard precious time, and with half a second covering the top 19 cars, his small error meant he started from P16.

It was another solid start for McLaughlin, and he was never challenged as he immediately took control of the race off the start line. Coulthard also moved up one place into P15. 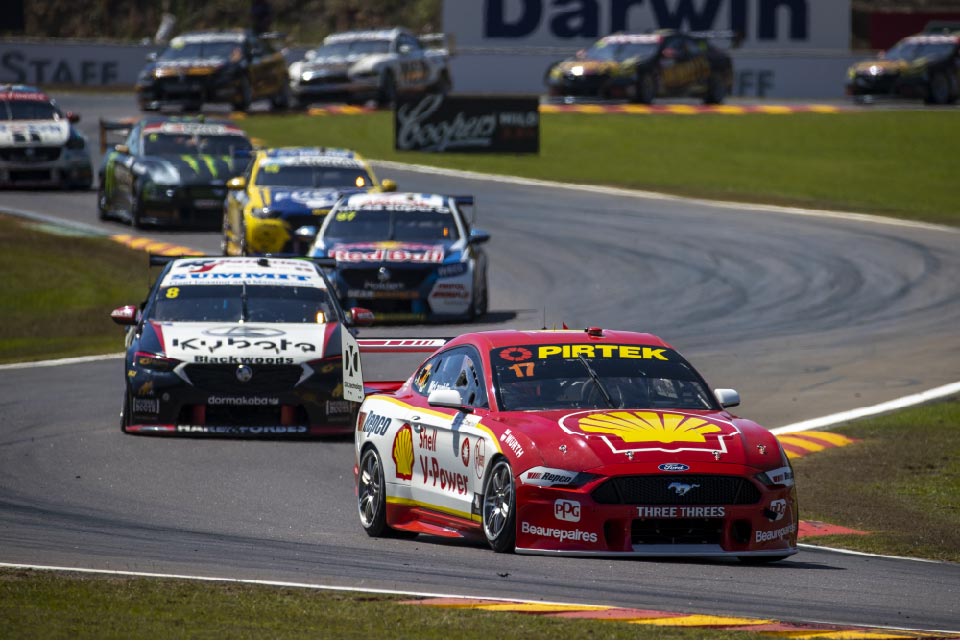 Sticking with the shorter first stint strategy, McLaughlin made his compulsory stop on lap 8, re-joining as the effective race leader. Coulthard had good race pace and was hot on the tail of Fullwood, fighting for track position. But on lap 16, the two made contact and Coulthard was handed a 5-second time penalty for sending Fullwood into the dirt.

Coulthard ran a long first stint and was one of the last cars in the field to stop on lap 29; he re-joined in P14. Aware of his looming post-race time penalty, he pushed hard and made up four more places in the closing stages of the race, crossing the finish line in P10. Fortunately, the time penalty only dropped him down one place to P11.

With the win never looking in doubt, McLaughlin charged home to claim his third win for the weekend as well as the round-winner trophy. 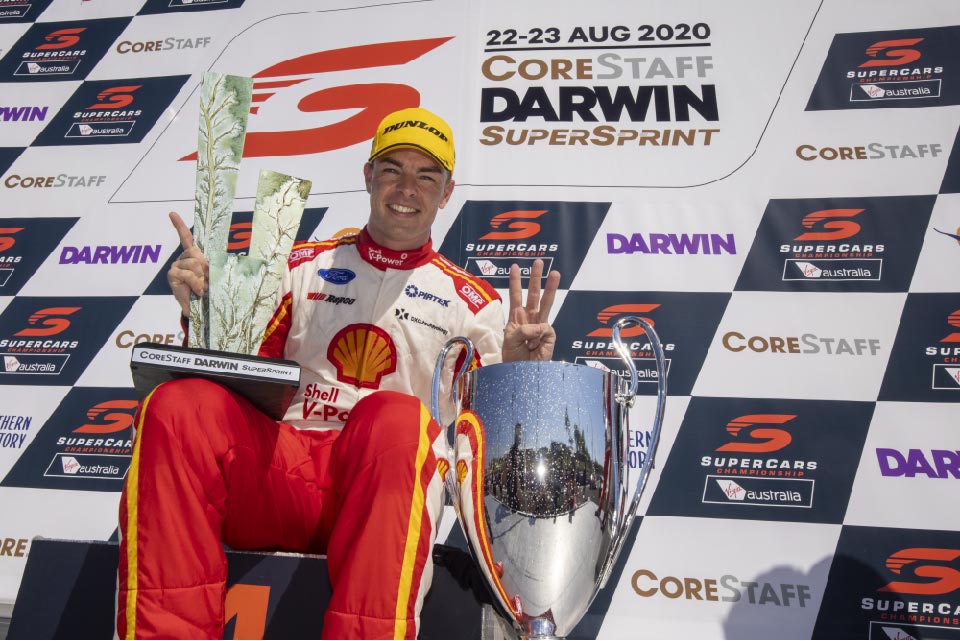 McLaughlin extends his lead of the Virgin Australia Supercars Championship to 177 points while Coulthard remains inside the top 10 in P9. The Shell V-Power Racing Team also continues to lead the Teams Championship by 60 points.

Coulthard noted, “The first qualifying session today was good, and we qualified P6. Then in the race, we had a great start and got up pretty much level with Scott into turn 1, but just lost out to Shane being on the outside. After that, I settled into P3 and had good pace.”

“It was good enough to run in the top three or four but lost out to another car that had just pitted later and came out on 22-lap better tyres, and you can’t defend that. So I finished P4.”

“We made a small adjustment for the second qualifying, but I don’t think we made the car better. So I qualified down the pack a bit.”

“In the race, once I passed the cars that were holding me up I had good pace. Unfortunately, the time lost being back in the pack meant I wasn’t able to recoup track position. I really need to focus on qualifying because it is so hard to pass these days. But we’ll have a look at everything and hopefully go a few better in Townsville."

McLaughlin said, “We’ve made an absolute jet out of this car; we’ve been working on it all week. Having back-to-back rounds has been good. Being able to come back to the track and go on a track walk with Ludo was a good opportunity for him to really understand what I wanted from the car. And today, that is exactly what he gave me.”

“It’s all preparation, and I’m just really proud today because the car was phenomenal. To pull a gap like that in a field that is this tight is a really proud moment for our team.”

“I have worked hard on my starts - I’ve got a really nice procedure and I feel for the bite point now. When I first started I was pretty average and stalled it a lot, but I’ve worked on it and it’s a confidence thing. That last start was the best start of the weekend for me.”