2020 Recap of Sydney SuperSprint Round 4

With only three sets of hard tyre compounds and two sets of softs allocated for this event, tyre selection was very much game of poker between teams.

Using a set of green soft tyres, McLaughlin clocked a Qualifying lap record with a time of 1:27m7428s, smashing the time he set during the last Sydney SuperSprint event. He claimed his 64th career pole and 9th at Sydney Motorsport Park. 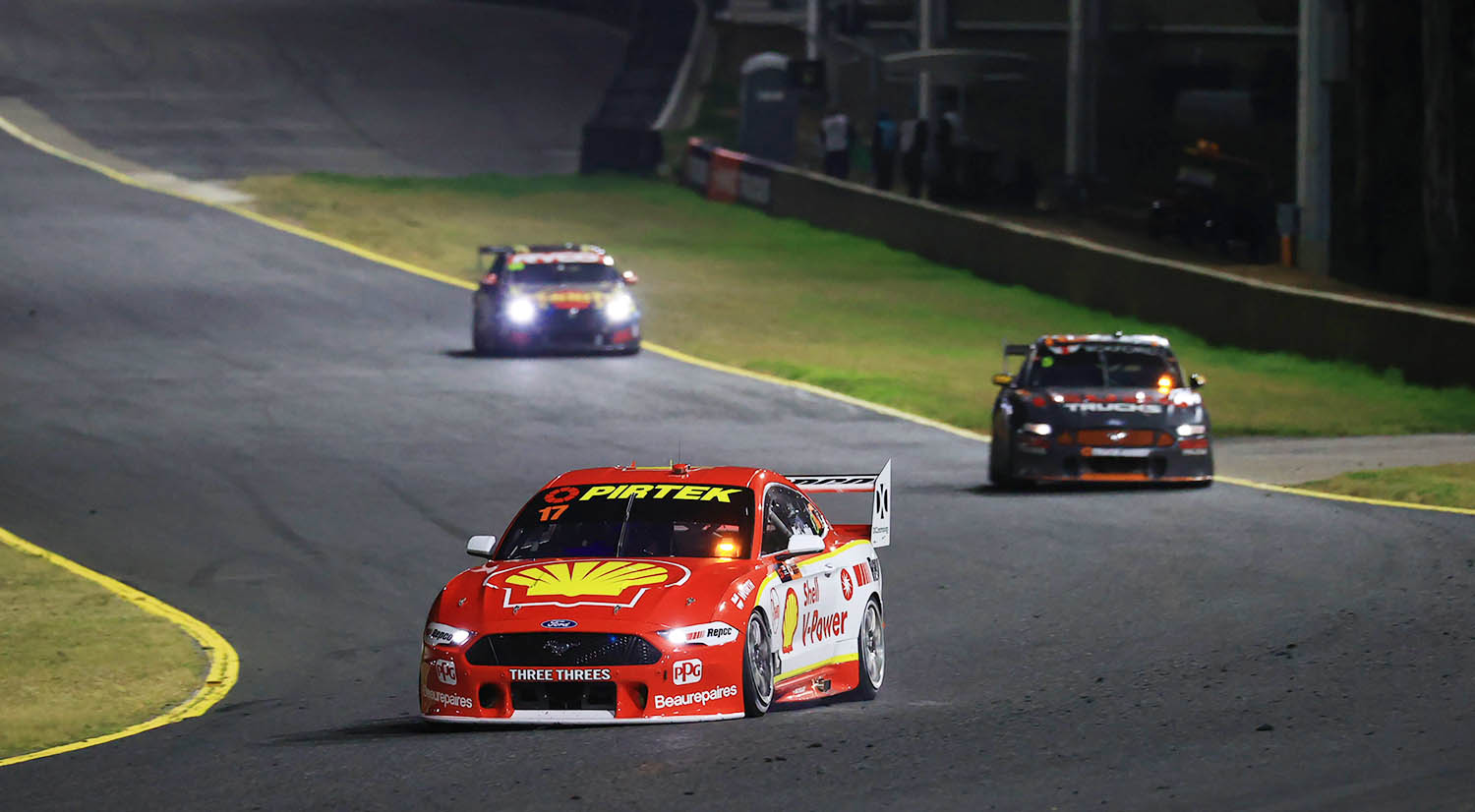 After progressing through the two-part Qualifying session, Coulthard was the last driver out on track in the Top 15 Shootout and clocked a time good enough for P6, despite being on used tyres.

Both the Shell V-Power Racing Team Mustangs started Race 10 on hard tyres, as the majority of their competitors did. While both McLaughlin and Coulthard had an explosive start off the line, they were both quickly overtaken by those on soft tyres. At the end of the third lap, McLaughlin was in P5 and Coulthard P6.

The first stint was somewhat processional with McLaughlin and Coulthard holding their positions and were the highest placed of all the cars on hard tyres. McLaughlin made his compulsory stop on lap 11 and swapped to soft tyres. On lap 16, Holdsworth rejoined the race just ahead of McLaughlin after pitting for a second set of soft tyres. McLaughlin didn’t back down from a battle, and after a slight nudge of panels, passed Holdsworth at turn three.

By lap 20, Coulthard was sitting in P2 and was starting to eat away at the margin to Red Bull’s van Gisbergen in P1. Coulthard ran long on his hard tyres and after leading the race for a short time, was one of the final cars in the field to stop with just 12 laps remaining. He ran an alternate tyre strategy to his teammate and stayed on hard tyres, saving his soft rubber for tomorrow’s races. 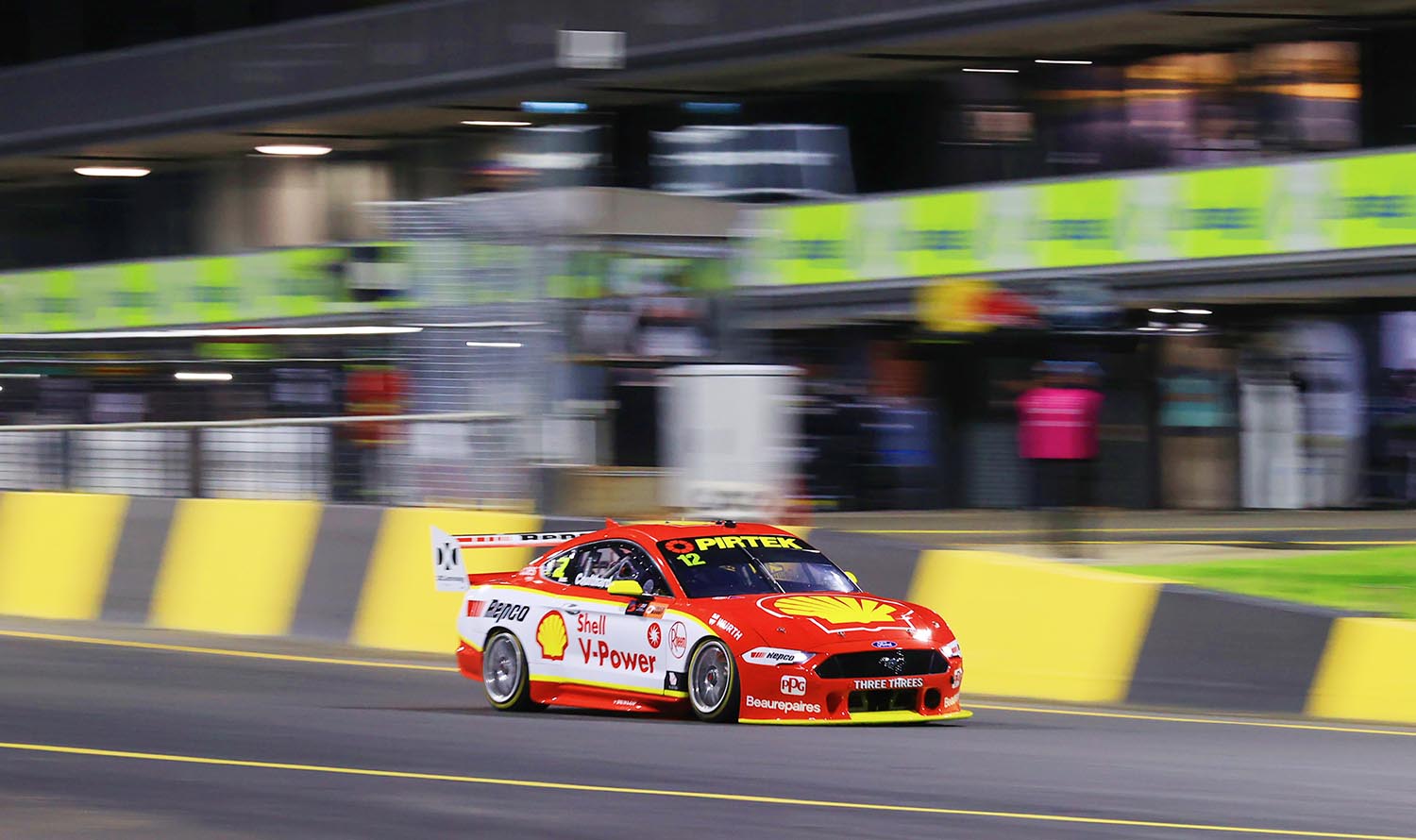 With 10 laps to go and all stops completed, McLaughlin was leading with a gap of just one second to Holdsworth who was hot on is tail. Coulthard was in P9 and had moved up another two to places by the closing stages of the 130km race. Positions remained unchanged to the chequered flag with McLaughlin winning and rounding out a perfect day, and Coulthard finishing in P7. 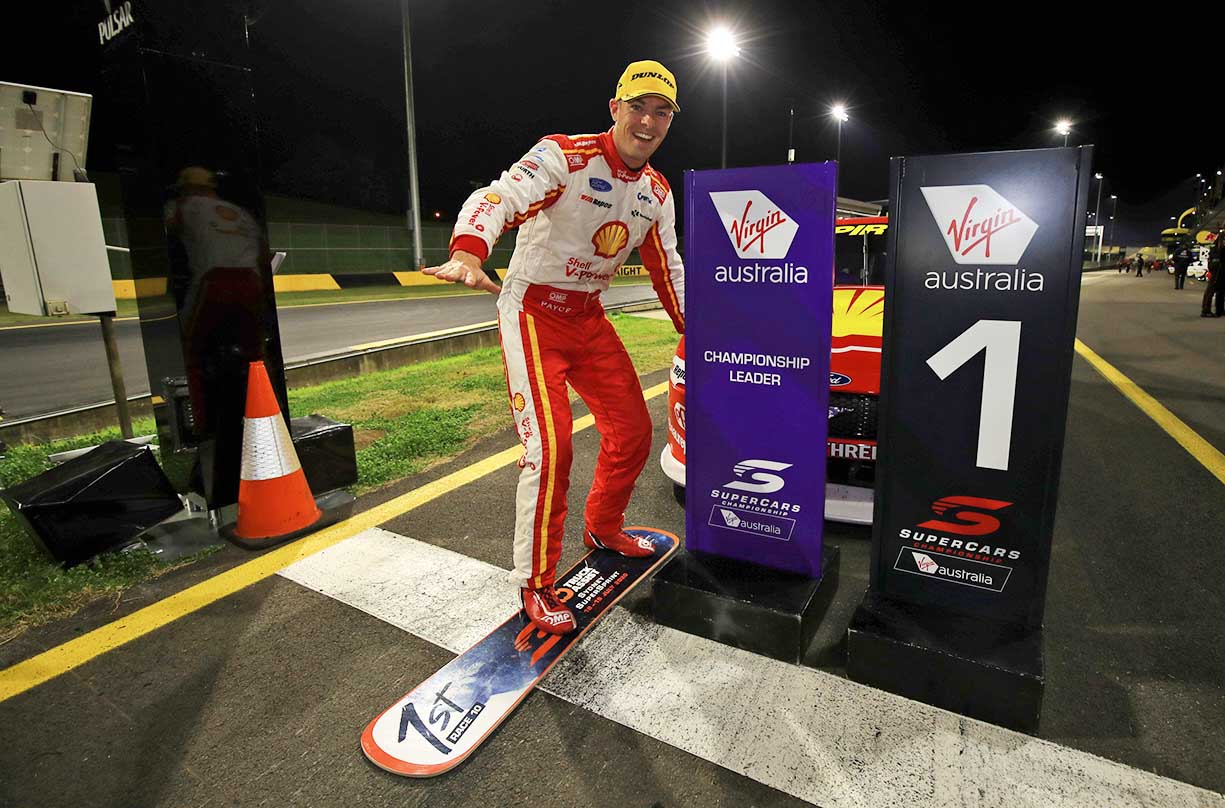 McLaughlin extends his lead the championship by 26 points to a 75 point lead, with Coulthard advancing from 13th to 11th in the standings.

Coulthard spoke of the event, “I thought our day was solid – in both practice sessions we were P3, and I did a good lap time in the shootout to get P6 on used tyres. Our strategy and decision making on the run was good by all our guys here."

"For us to move forward in the race was good. We probably could have used a set of softs and got to about 4th but we didn’t lose too much running two sets of hard tyres. It leaves us in a good position for tomorrow.”

“I’m still a little shocked as to why some people put all their eggs in one basket tonight and haven’t let themselves much for tomorrow, but we’ll just worry about ourselves.”

McLaughlin added, “Far out, the car was so good on both compounds today, and I was really proud of the guys during the pit stop. These guys have been working so hard at the Shell V-Power Racing Team to get our pit stops right and consistent. And every time I come in, it’s just mint.”

“I had a solid day with a pole and a race win; you can’t get much better. We set ourselves up with a strategy that was similar to a lot of people, but hopefully this sets us up well for tomorrow.”

The Shell V-Power Racing Team grabbed a double podium in Race 11 at the Sydney SuperSprint with Coulthard finishing P2 and McLaughlin finishing P3 after a nail-biting battle to the flag.

In an incredibly tight Qualifying session, McLaughlin claimed his 10th pole position at SMP by two-hundredths of a second. Coulthard was just 0.6394 behind, a time good enough for P5. 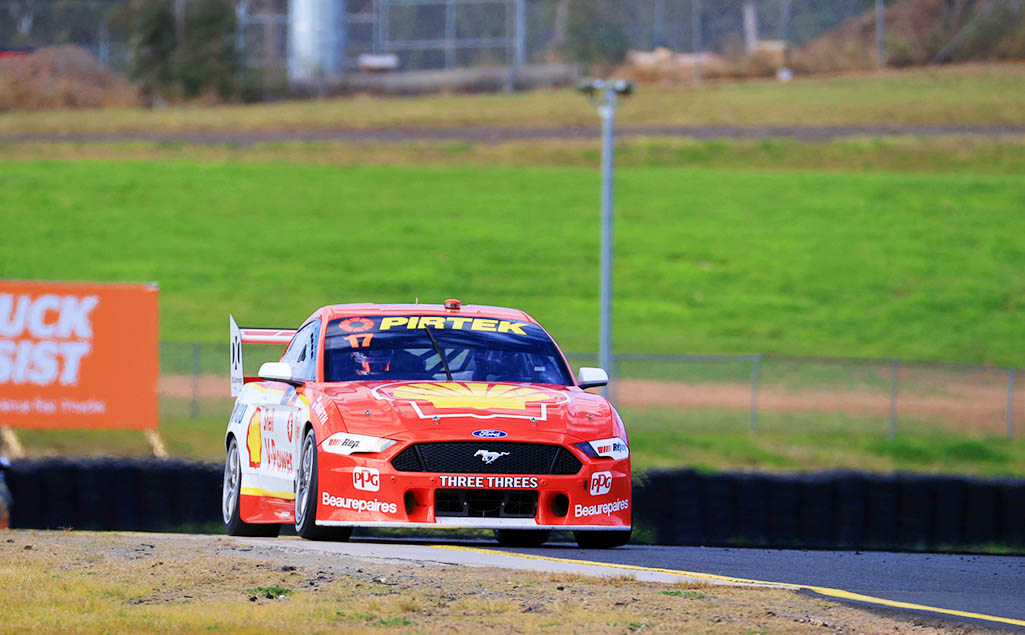 For Race 11, McLaughlin started on hard tyres and Coulthard, who had saved his tyres for today's races, started on softs. When the lights went green, rival van Gisbergen, who was on soft tyres, shot past McLaughlin on into turn 1. Coulthard moved up to P4 on the opening lap and was chasing down Percat who was just ahead and using the same tyre compound.

In the opening laps, McLaughlin had no choice but to concede track position to three cars which were on the faster rubber, one was his teammate, and he dropped back to P5. Coulthard charged forward into P3 and was less than two seconds from the lead.

Coulthard was first of the Shell V-Power Racing Team drivers to pit on lap 12 and took on another set of soft tyres. McLaughlin was the fastest car on the hard tyre during the first stint and didn't fall further than P6 in the order before coming in for his stop on lap 13 and taking four soft tyres.

With all stops completed and eight laps remaining, Coulthard was P2 and 5.4 seconds from the lead, while McLaughlin was P5 and focussed on hunting down a podium position. Slowly but surely McLaughlin chipped away at his lap times and in the dying stages was hot on the back of Kelly and Courtney.

It was a freight train of Mustangs, and McLaughlin was trying everything to pass Kelly. The opportunity came on the final lap. It looked impossible for him to also get past Courtney, but on the last corner McLaughlin made a run up the inside, and it was a drag race to the finish line.

There were millimetres in it, but McLaughlin somehow managed to inch just half a car length ahead as the chequered flag was waved. 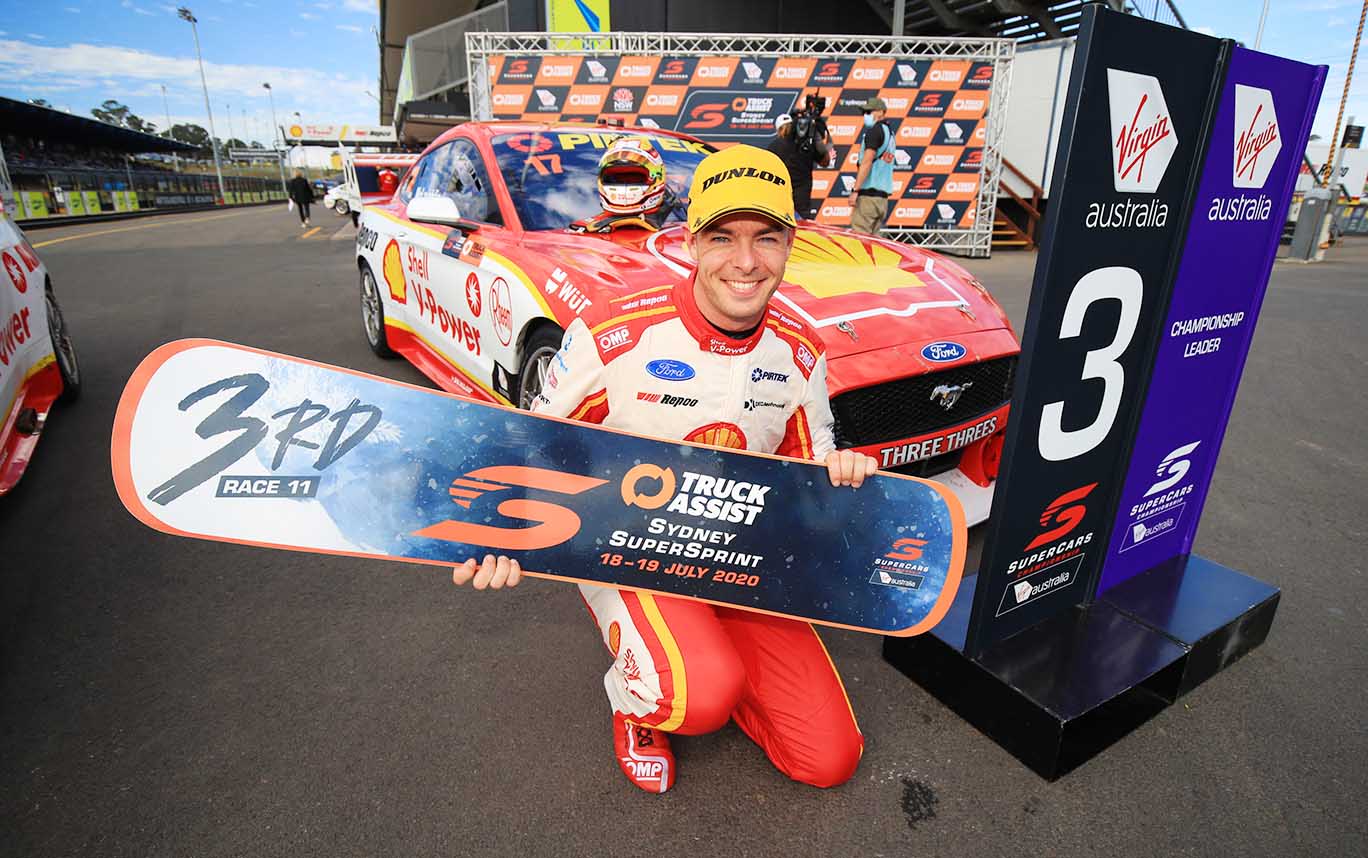 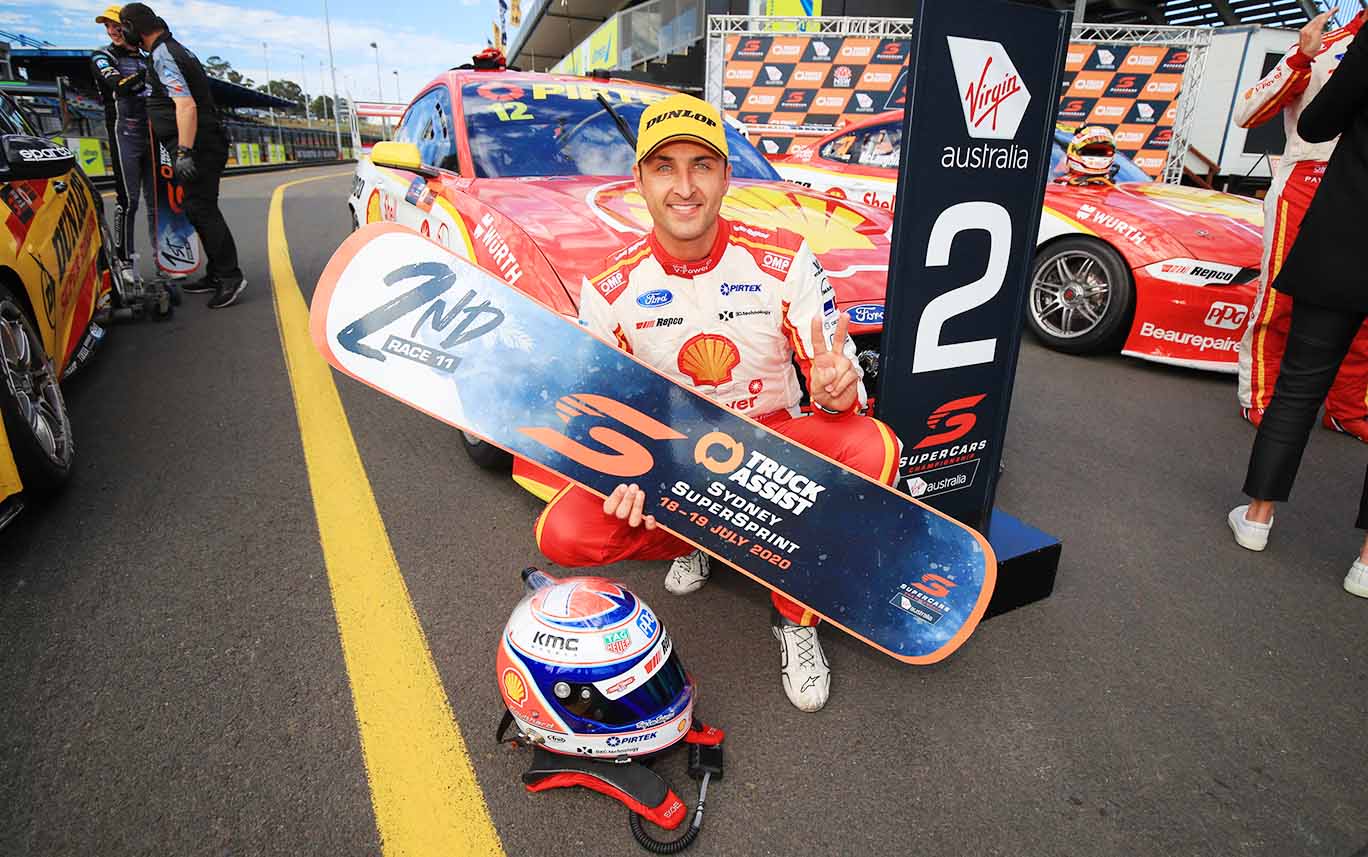 The last race of the Sydney SuperSprint was always going to be difficult with limited tyre quality left. The condition of the No.12 Mustang's soft tyres was immediately evident as McLaughlin quickly lost two places on the opening lap, and another three by lap 3. Coulthard, who opted for hard tyres for the first stint, also dropped one place to P14.

McLaughlin's Mustang suffered damage to its left rear corner at the hands of Percat, but it was only superficial. The Kiwi pitted on lap 8 and took a set of hard tyres. Coulthard stopped just two laps later and also swapped to a set of hard tyres to finish the weekend's racing on. He and his teammate were positioned in P13 and P14 respectively as the field finished filtering through their stops.

On lap 21, Coulthard passed his teammate and moved up to P13. Coulthard with the first of the Shell V-Power Racing duo to make a move on Holdsworth who was just ahead, but there was contact when McLaughlin also tried to pass. While Holdsworth ended up in the dirt, the bunker called "play-on" because of the overlap and pace McLaughlin had on him.

Having used up their tyres in the earlier races, Coulthard and McLaughlin weren't able to match the pace of the cars ahead on fresher rubber. Coulthard finished in P13 and McLaughlin in P14.

Coulthard recalled, “I said that we wouldn’t run away from a fight and this weekend was good proof of that. We left SMP last time 17th overall for the round in the points, and we turned that around to finishing P3 for this round. So thanks to my team for all their work in between rounds to give me something to fight with.”

“The highlight for the weekend for me was getting back to the podium in Race 11, although it was a bit of a sombre experience without the podium celebrations. But that’s what needs to be done during these times. Eyes forward to the next event as I think there is still more speed to come.”

McLaughlin noted, “Overall, it was a really solid weekend for us in car No.17, and I think we made the best of a bad set of tyres in the final race. The race earlier today was awesome with the battle at the end to get third on the line and get some good points there. Then it was just a matter of trying to make the best of things in the final race.”

“I’m really proud of the crew because the pit stops on the cars were unbelievable and they are always on it. I’m really looking forward to Darwin now, so let’s roll on.”