After claiming his fourth pole position of the year, Shell V-Power Racing Team driver Anton De Pasquale went on to finish 2nd in Race 17 at the Townsville SuperSprint. A bent wheel nut and clip meant the crew count not change teammate Will Davison’s rear tyre during his pit stop, dropping him out of top five contention. He finished 11th. 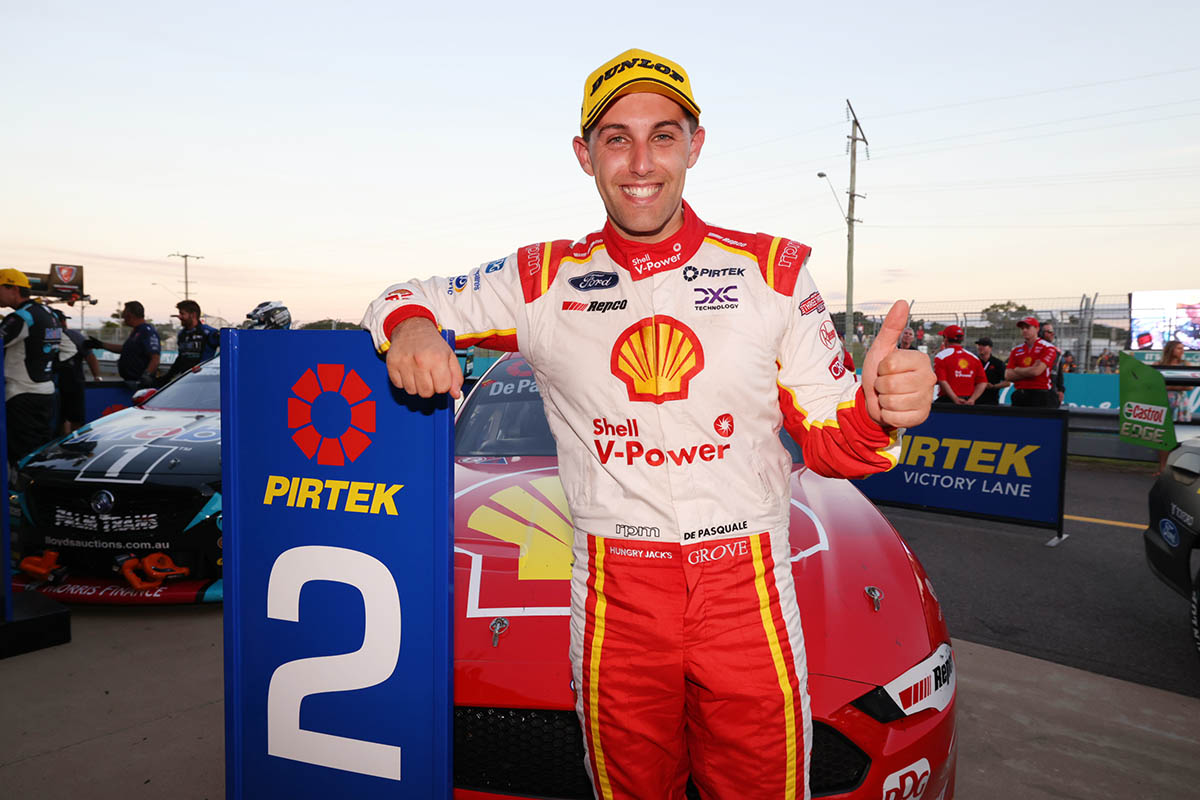 De Pasquale started Race 17 in P1 and Davison P3 after cruising through the three-part qualifying session, which included a Top Ten Shootout. 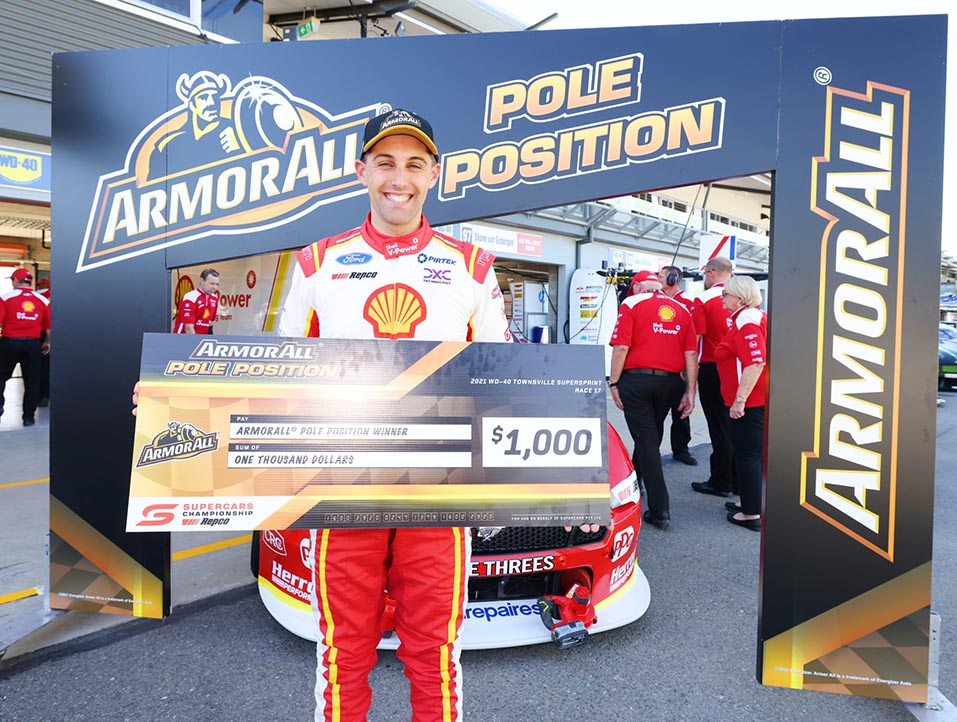 Waters and Whincup were fast off the start line and made De Pasquale and Davison work hard to hang on to their positions. De Pasquale battled hard with Waters during the first lap but held onto P1. Whincup unfortunately got the better of Davison, pushing back him to P4.

On lap 5, De Pasquale was more than 1-second ahead of Waters, but Davison was passed by Mostert and then Van Gisbergen, dropping him to P6. Van Gisbergen was given a 15-second time penalty for a driving infringement on Davison, which he had to take during his pit stop.

De Pasquale complained his rear tyres were “really bad” on lap 15 but waited until lap 17 to pit after Waters and Whincup stopped the lap before. He took on three fresh tyres during his stop and was immediately battling Waters as he rejoined the race. Waters, with the undercut, got the upper hand and became the effective race leader.

Davison followed Van Gisbergen into pit lane on lap 21 for three fresh tyres. Van Gisbergen had to serve his time penalty, which should have given Davison plenty of breathing space. But Davison had a bent wheel nut and clip on his left rear wheel from an earlier hit by Van Gisbergen, so the crew could not change his tyre. This was hurting him straight away as he rejoined the race.

Once all stops were completed, De Pasquale was P2 and Davison P12. With 10 laps to go, De Pasquale was just 0.74 seconds behind Waters and had Whincup behind him. Whincup got past De Pasquale but was yet to serve a 15-second time penalty he received for exceeding the speed limit in pit lane. This was taken off his race time post-race.

Davison passed Percat late in the race to move up one position. Davison finished the 39-lap race in P11 and De Pasquale P2.

De Pasquale noted, “Any day you get a trophy is pretty good. We had the potential to get the win today, so we’ll have a look at the why and how. If you said at the start of the day you’re going to come and get a trophy, you’d be pretty happy.”

Davison added, “It was obviously a difficult day. In the pit stop we had the unfortunate issue with the wheel, and that was that. I got hit by Shane pretty hard and that might have caused the issue with the hub. We couldn’t get the wheel off, so I had to finish the race on the same set of rear tyres, which was not much fun.”

“I had a bit of an up and down day. We struggled in practice but then made good inroads in qualifying. We still struggled quite a bit in the race early on, but I think we would have comfortably had a top-five result today. Hopefully we have a better Sunday.”

This morning’s short 10-minute qualifying session saw Davison clock a time fast enough to put him on the second row of the grid in P4 for the start of Race 18, while De Pasquale qualified down the order in P14.

Hoping an undercut would pay off later in the race, De Pasquale was one of the first cars into pit lane. He stopped on lap 7 and took on two rear tyres. Davison played the long game and didn’t stop until lap 19, taking on three fresh tyres. He came out behind De Pasquale and Fullwood, but by lap 24 had overtaken them both. 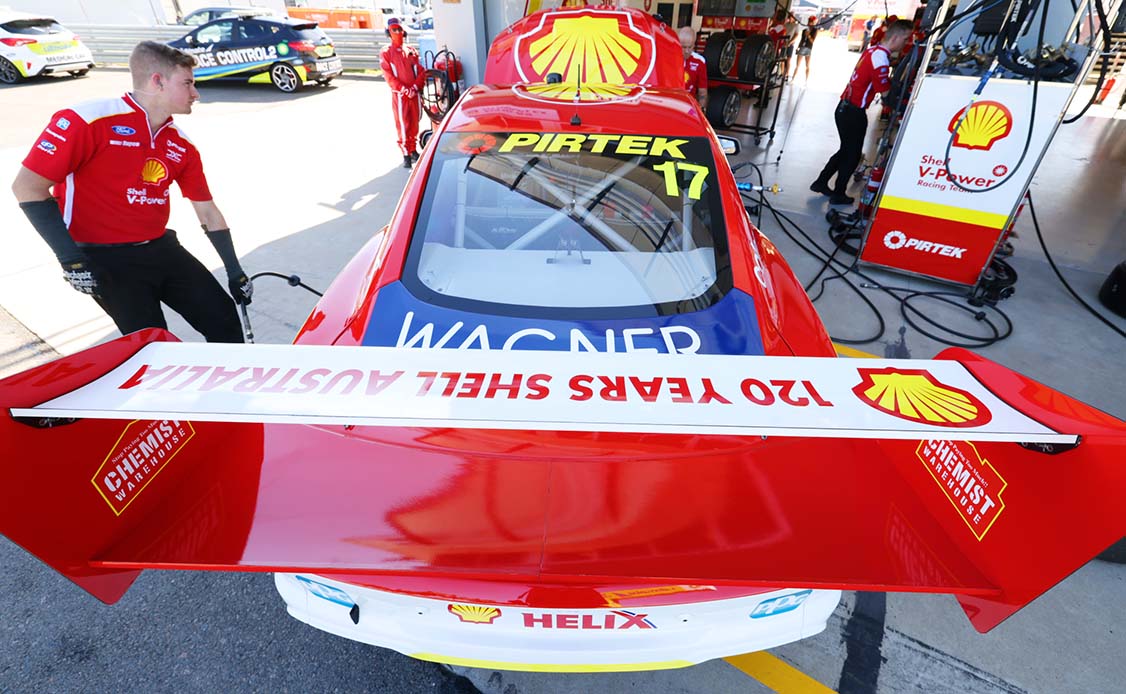 Struggling for grip, De Pasquale was passed by B. Kostecki on lap 26, dropping him down to P6. With just 12 laps remaining, car No. 35 had an issue and dropped oil on the track through the back chicane. Luckily it didn’t cause any issues for the Shell V-Power Racing Team Mustangs.

The early pit stop was hurting De Pasquale late in the race, and with 8 laps to go, he had dropped to P8. Davison was fighting hard to get past Mostert in the final stages of the race to try and claim a podium position. He got a look-in on the last turn of lap 38 but didn’t have the tyre life and couldn’t get past. 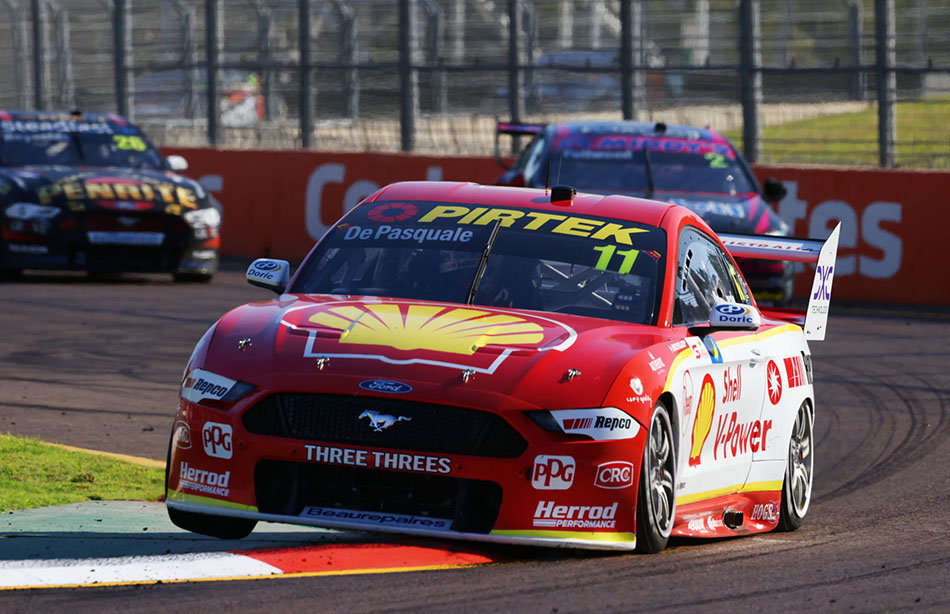 For Race 19, the Shell V-Power Racing Team locked out the second row with De Pasquale P3 and Davison P4.

Davison got the better start of the two teammates and moved to P3 straight off the line. Hazelwood got around De Pasquale, pushing him to P5. Waters and Van Gisbergen started to pull away from Davison by lap 5, but Davison, Hazelwood and De Pasquale stayed in touch with only 2.5 seconds separating 1st and 5th.

Pitting from P3, Davison was the first of the Shell V-Power Racing Team Mustangs to stop on lap 13. He was trying for the undercut and took on three fresh tyres. A safety car was called on lap 18 after car No. 96 hit the wall. De Pasquale headed to the pits, as did the rest of the field, for fresh rubber.

An unfortunate safety car delay meant that Davison was P2 at the restart and was positioned between Waters and Van Gisbergen, De Pasquale P7 behind Whincup and in front of Slade.

Van Gisbergen found his way past Davison dropping him to P3 while De Pasquale jumped up to P5. Their positions remained unchanged until the end of the race. Davison clinched a podium, finishing in P3. De Pasquale finished P5. 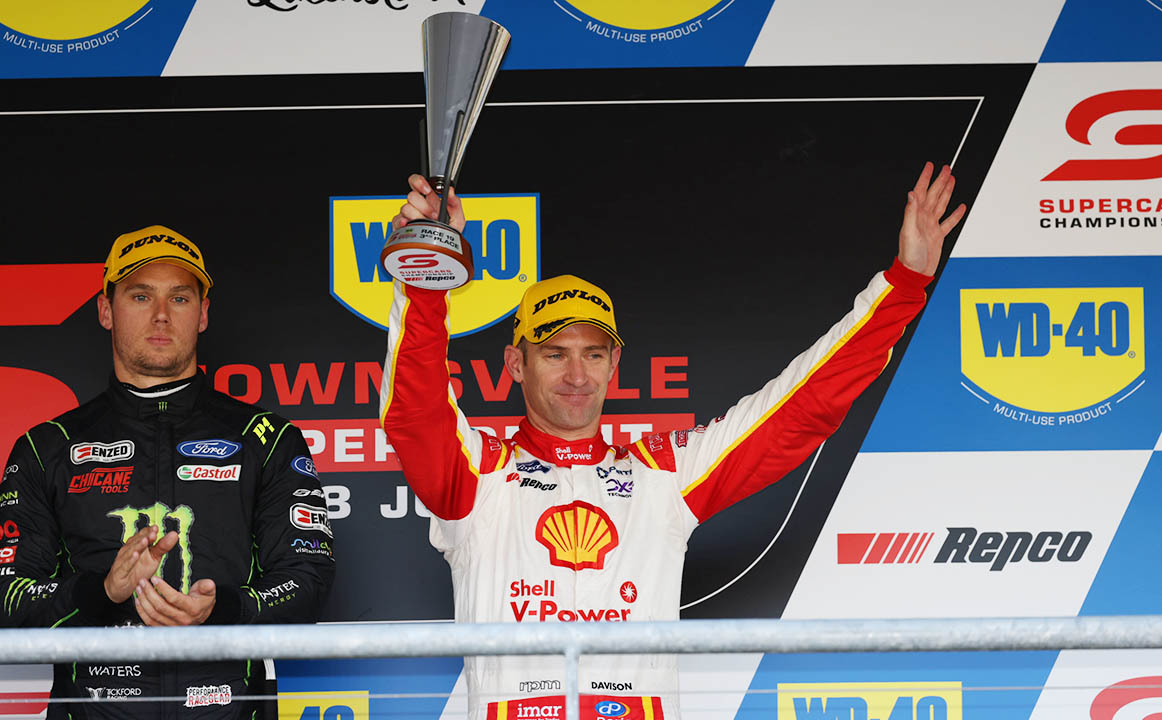 Davison now sits P5 in The Drivers’ Championship standings, while De Pasquale is P6. The Shell V-Power Racing Team is still P2 in the Teams’ Championship.

De Pasquale said, “Today I had an average qualifying in the first session but got an alright result in the second one. So the first race was just about making up places because we were buried deep in the pack."

"Then in the second race, I was just stuck behind a couple of cars for most of the race which made it a little bit hard. We tried a couple of things during the race but probably didn’t go completely in the right direction. But we are learning all the time, and I’m looking forward to racing at QR in a few weeks.”

Davison noted, “I’m happy with that result because the guys have worked really hard on the car the last few weeks. It’s been a real battle, but we haven’t really been off the second row on the grid. The races have been challenging, although we’ve certainly had strengths at times, particularly over long stints."

“To get the team a trophy today is sort of a thank you for all the hard work, but the race certainly could have been different without the safety car, so I’m a bit disappointed as well. I lost six or seven seconds behind the safety car when we should have been a long way up the road with the undercut, which had worked really well."

"But that’s the way it goes. There haven’t been any safety cars lately, so the one race where we had a bit of a crack and went early and took a bit of a punt is where it happens. Thank you to the team who has certainly done a great job with the car today.”