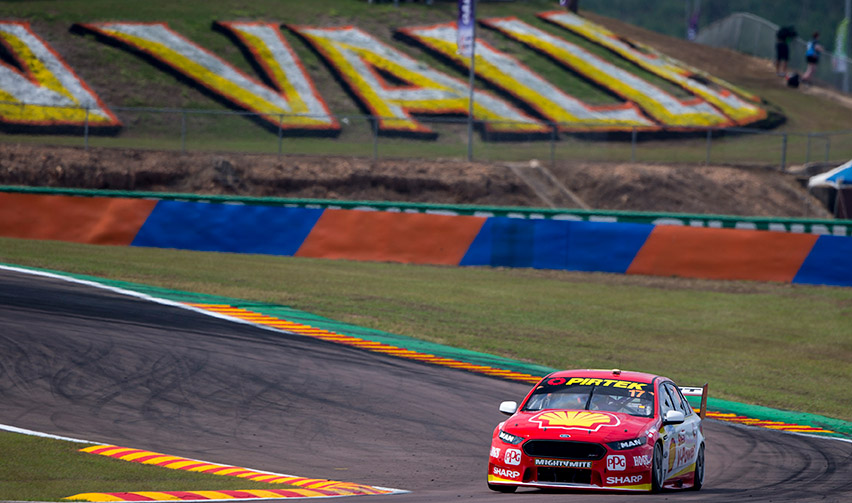 It was hot and humid day in Darwin, with on-track action beginning at Hidden Valley Raceway. Scott McLaughlin and Fabian Coulthard rolled out for opening practice and were on the pace early, however as times improved across the field through the session, McLaughlin and Coulthard moved their focus to race runs and long run pace on older tyres.

Practice 2 saw temperatures increase to 32 degrees Celsius, with the session seeing most runners use green tyres to do qualifying simulations. Both Shell V-Power Fords were fast, with McLaughlin setting the fastest lap of the day to take first place. An issue was later found in the rear end of Coulthard’s car, however he still ran a solid time to finish the day eighth. Practice 3 will come up tomorrow morning at 10:50am local time.

Coulthard commented on the practice runs, “Today was OK, and I’m not unhappy with how things went. The boys found something wrong in the rear of the car during Practice 2 when making other changes. We’ll fix it and that should make it better for tomorrow.”

McLaughlin went on to say, “We worked through a good plan all day, and to end up on top is nice. I think the car was pretty strong from the outset, and we just tuned it up as we went along, not having to make any major changes or anything like that. It was pretty smooth running.” 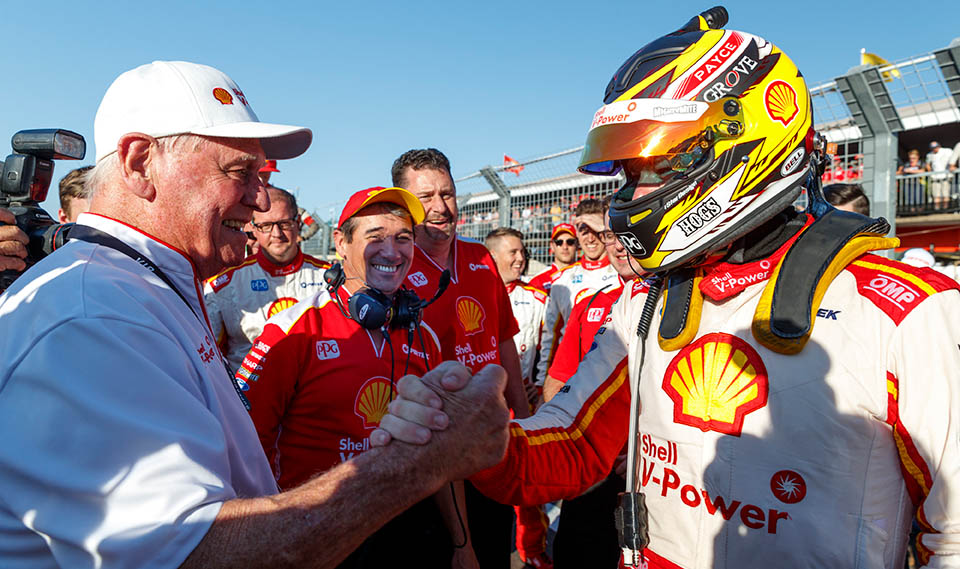 Race 15 saw contrasting fortunes for Scott McLaughlin and Fabian Coulthard. Starting second, McLaughlin settled into the second position for the opening stint of the race behind polesitter David Reynolds. The pit stops started on lap six, with McLaughlin taking his first stop on lap seven. The team changed right side tyres only, with McLaughlin emerging as the effective leader in front of Nissan’s Rick Kelly. McLaughlin was back up to p10 on lap 17, and continued his charge back to the lead as the pit stop cycle continued. McLaughlin was challenged late in the race by Shane van Gisbergen, who pitted on lap 20 and was using much fresher tyres to charge through the pack. He got within half a second of McLaughlin by lap 33, but McLaughlin drove well and was able to hold him off to take the team’s 100th all-time victory. Coulthard’s race saw him start 14th. He got up to 10th position on lap one, and continued to push through the pack, pitting from fifth on lap 12, re-joining in 18th. He was back into 14th place late in the race, however as he began to struggle with tyre life, those who stopped late were able to push past Coulthard to see the No.12 driver finish 15th. McLaughlin now leads the Championship by 143 points from Shane van Gisbergen. Coulthard remains seventh. The team now leads the Teams’ points by 69 points from Triple Eight Race Engineering.

Coulthard gave his words on Race 15, “I Got a good start, and made up four or five spots on the opening lap. We decided to pit early, but in in hindsight it probably wasn’t the right call. We’ll just regroup, and learn from it for tomorrow. I’m stoked for the team to have taken the 100th win, and to have been a part of that is a pretty proud moment. It’s a massive achievement.” 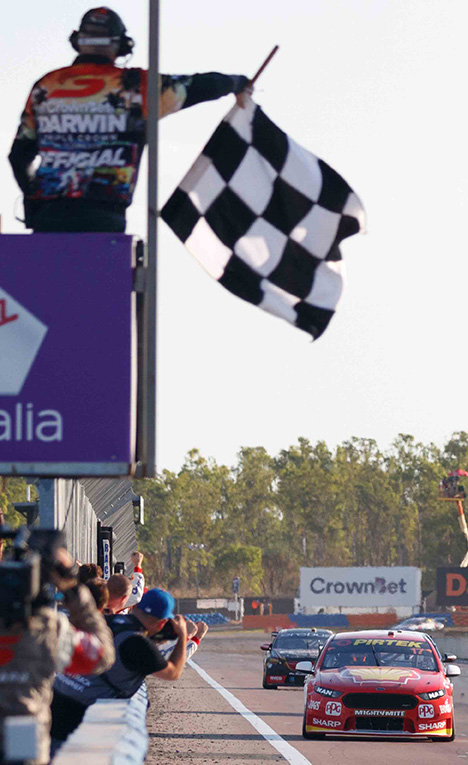 McLaughlin continued, “I’m glad I didn’t have a heart rate monitor on – I would have blown the thing off the scale! Thanks to everyone at Shell V-Power Racing Team, they put a lot of faith in me to bring it home today, and thankfully I did. I wanted that win really bad to repay all the hard work the boys have been doing behind the scenes, and for it to be the 100th win for the team makes it a really great day.” 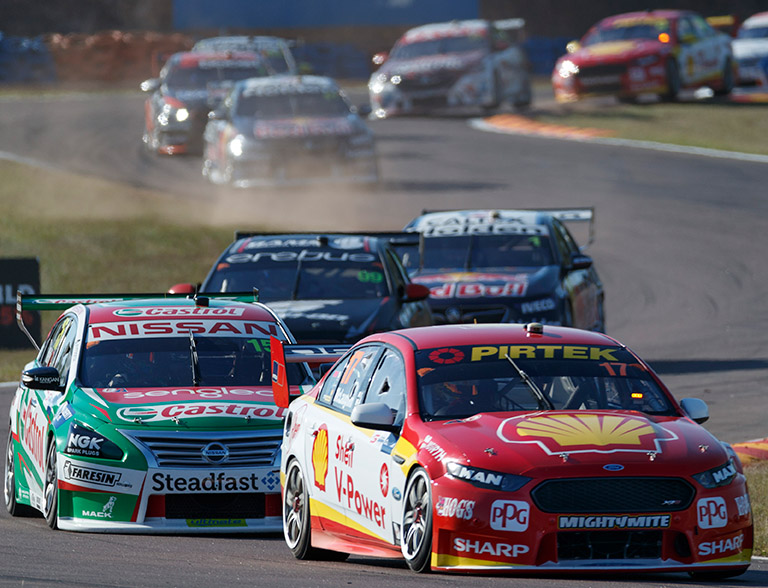 Race 16 started well for the Shell V-Power Racing Team, with both Scott McLaughlin and Fabian Coulthard getting off the line strongly on the long chute down to turn one. McLaughlin settled into third place for the opening stint, with Coulthard up one spot to seventh. The opening stint was longer than yesterday, with Scott pitting on lap 21 and re-joining p13 in effective fifth place on the road. In-car cameras showed that McLaughlin’s cooling fan air hose had disconnected from his helmet, in a 68-degree Celsius cabin to test his preparation and fitness. To add to the issues, Car No.17 started to blow smoke around lap 30, with oil temps rising to cause oil surge/blow-by in the engine. Car No.17 engineer Ludo Lacroix coached McLaughlin to ensure that he got cooling air into the engine on the straight across each lap, and the problem was able to be managed as temperatures came back under control. A lap 55 Safety Car bunched the field back up, however on the restart it was status quo at the front as Reynolds pulled away from McLaughlin, who continued to manage his engine issue whilst defending from Jamie Whincup behind him. McLaughlin was able to maintain position, and took a hard-earned second place for his second podium of the weekend, extending his championship lead to 161 points. Coulthard was mid-pack after his first stop, and then made a series of moves to get through the field passing several cars to get himself back to 8th position. He was under some pressure late in the race, but held the spot to finish where he started. Coulthard maintains seventh place in the points, whilst the team continues to lead the Teams’ points by 48 over Triple Eight.

Coulthard weighed-in on the race afterwards, “We started eighth, and worked hard to finish eighth! I made some good passes, I passed a lot of cars today. The car was good, but there were seven other quicker cars in front of us. We made the car a lot better today, but we unfortunately had to use more greens than we wanted to yesterday, so had to use old tyres in the Shootout today. We still managed eighth, so not a bad day. Onwards to Townsville.” 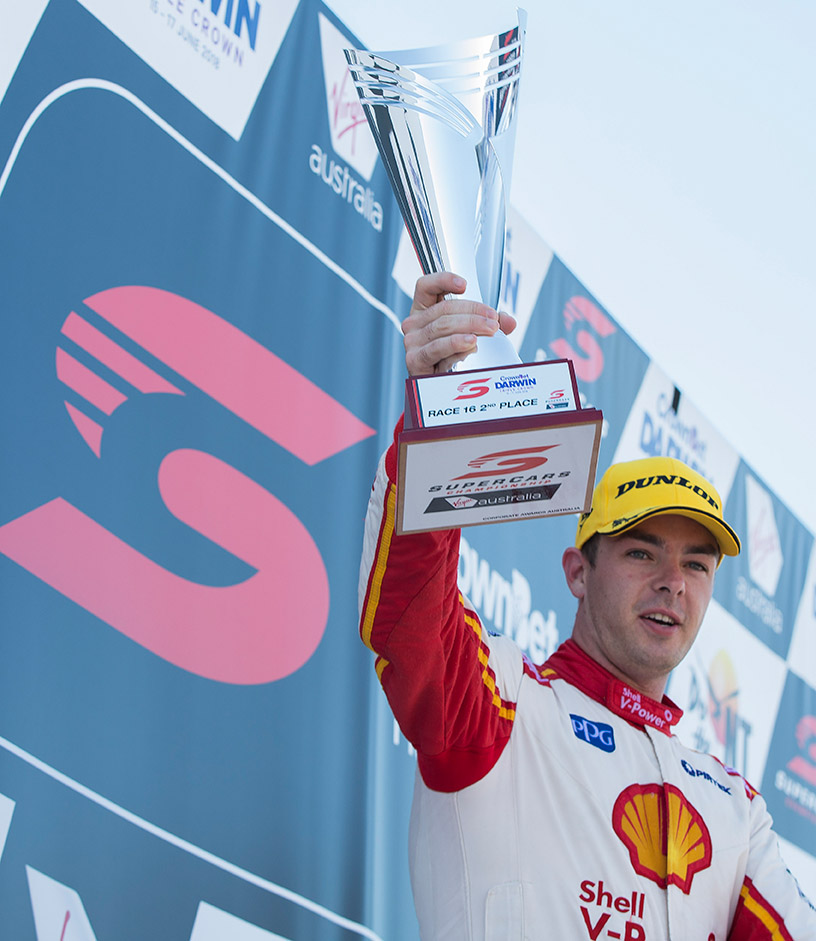 McLaughlin was happy of his performance despite the issues, “Congrats to David [Reynolds] and Erebus, they did a great job. For us at Shell V-Power Racing it was tough going there. The engine was hot, I was hot and we had stuff going on everywhere. It was a solid day for us, we’ll take that and run. The car was good, but I couldn’t get close to anyone because of the heat in the engine. And with the helmet fan it was very hot, but that’s why we train so we can go hard. All up, a solid result and we leave with more Championship points, so I’m happy with that.”