Scott McLaughlin and Alex Premat took a podium finish in today’s opening race of the Gold Coast 600 around the Surfers Paradise Street Circuit. Starting from pole, Premat ran a solid opening stint before handing the car to McLaughlin in second place on lap 34. It was then up to McLaughlin to try to chase down the Triple Eight Holdens, however it wasn’t to be with third the best the team could manage today. 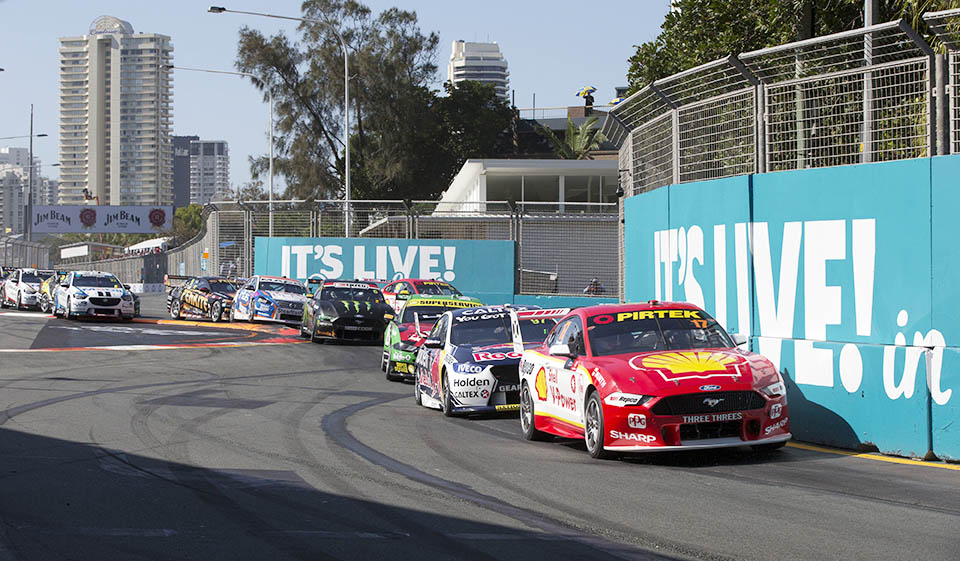 Fabian Coulthard and Tony D’Alberto finished inside the Top 10 on a day that saw them last early in the race following an incident with Car 22 on lap four that saw D’Alberto have to take to the escape road at turn four. 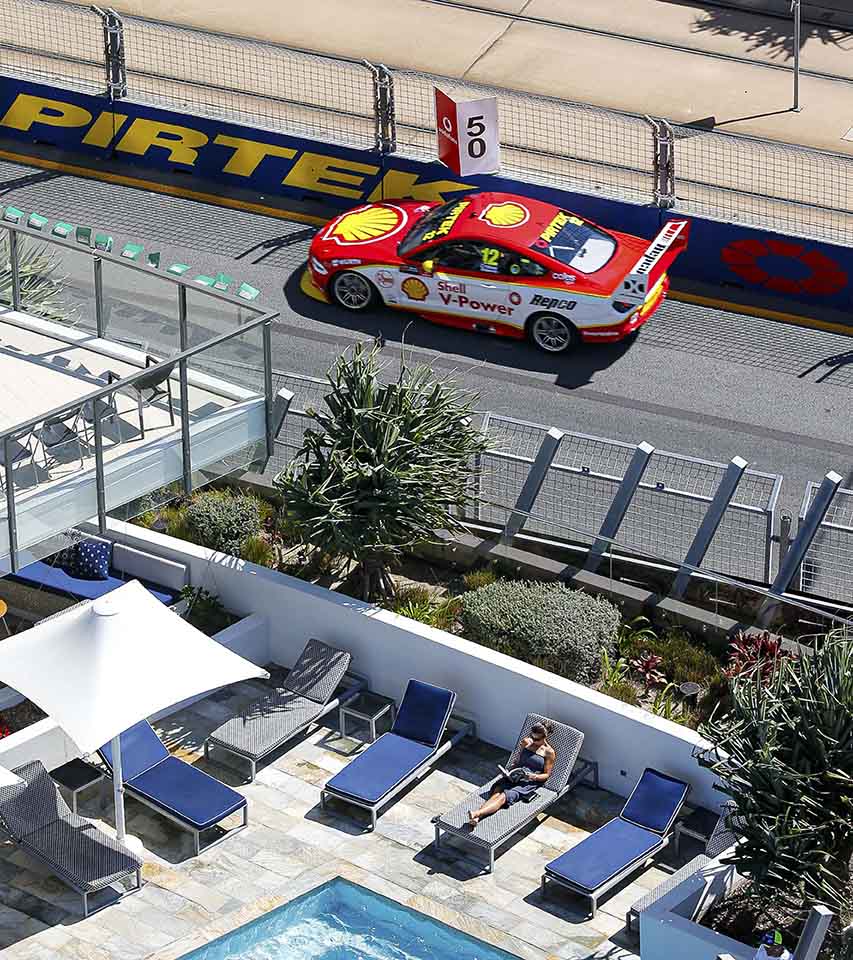 They then mounted a strong recovery drive, paired with good strategy that saw them launch through the field across the 300km race to finish ninth.

The drivers had the following to say of Race 26:

Coulthard: "Never good to be spun around and be back to last early in any race, but Tony did a great job on the recovery and then I got in and was able to get a few more positions. We'll aim for a clean race tomorrow and hopefully grab a podium."

McLaughlin: “We just didn’t quite have the pace today, third was about all it had in it I think. We’ve got a little bit to work on tonight, we know we’ve got a fast qualifying car so we should be able to start at the front and hopefully if we can have a good race car and it can be a bit better on the tyres we should be right.”

D’Alberto: "Frustrating to get knocked off track and pushed back to last early in the race. Car 12 was fast today, as Fabs showed late in the race. Hopefully tomorrow is kinder to us and we can get a solid result."

Premat: “It was nice to stand on the podium here on the Gold Coast again today, and to get another surfboard trophy. The car was pretty good, but we can definitely improve it for tomorrow so to be third is good. Good points to help Scott in the championship, so hopefully we can do more tomorrow.”

Scott McLaughlin and Alex Premat were forced out of the running at the Gold Coast 600 today when McLaughlin had a 43G crash into a concrete wall during qualifying this morning.

McLaughlin, who was sitting on provisional pole at the time, clipped the inside wall at the exit of the first chicane and fired across the track into the concrete, flipping the No.17 Mustang onto its side. 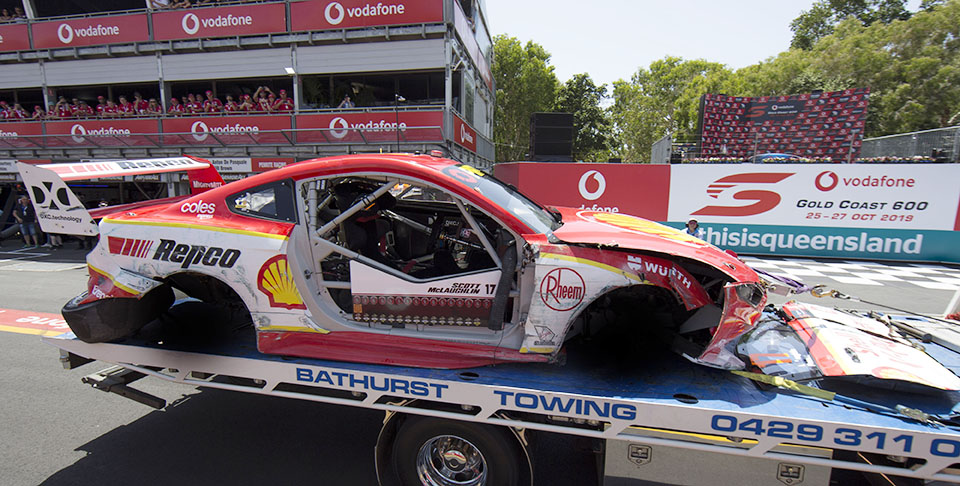 McLaughlin was able to pull himself from the car with the aid of officials and fellow competitor Shane van Gisbergen who stopped to assist, however he was subsequently admitted to Gold Coast University Hospital for additional tests. Following several tests, he was given the all clear and released.

Fabian Coulthard and Tony D’Alberto started the race from 16th on the grid, and battled an early engine issue that required a long first pit stop, before having to serve a penalty for a pit stop infringement. 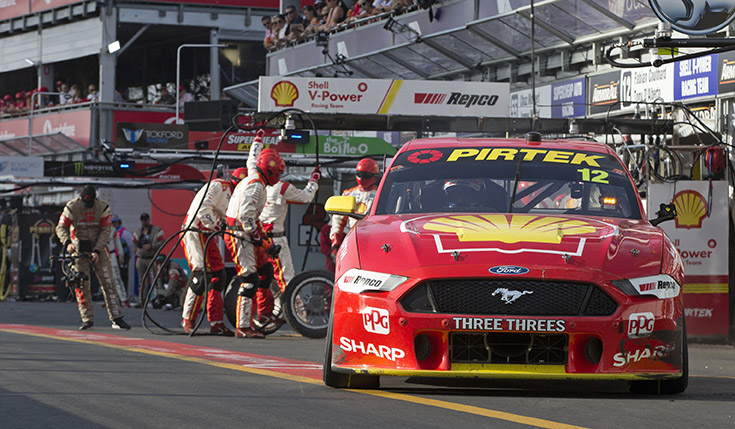 This pushed them deep into the pack, a lap down and meant that they both had to push hard to regain lost positions. Ultimately, they managed to get back to 11th at the flag.

McLaughlin’s lead in the Championship has been cut by 150 points to 463, with Coulthard sitting fourth 400 points further back. The Team’s points lead has also been cut, with it now sitting at 132 points.

The drivers spoke of Race 27:

Coulthard: "It's just been one of those weekends, to be honest. We've had pace, but no luck. We've been last in the races on both days, and fought back to grab a decent result. Hopefully TD and I can have a good run at Sandown in a couple of weeks."

McLaughlin: “That was the biggest shunt of my career, and its testament to the work put into these cars that I was able to walk away. Thanks to all the marshals and officials that helped me, and to Dr Carl and the Supercars medical team. Thanks to Shane too for stopping and checking on me. Because of the size of the crash, I had to go to hospital and have a few tests, but I’ve been given the all clear so now I’m looking forward to getting back on track again. I’m really sorry to my team, they’re going to have to put in some hard yards over the next week or so to get us ready for Sandown, but they are the best in the business so I’m sure we’ll be good as new in two weeks.”

D’Alberto: "We've had plenty of pace this weekend, but unfortunately we've got nothing to show for it. Being back in last place on both days wasn't where we wanted to be, but we came back and managed to get some solid points on both days. Hopefully Sandown is kinder to us!"

Premat: “It was a shame to be spectator today, but the most important thing is that Scott is OK. The car is not good, but the team already have a plan to swap us into a new car for Sandown so we will be able to have a good run there. This is a good team, and we will be back looking to win at Sandown.”