While Coulthard finished in P8 in the Top 10 Shootout, a penalty handed to car No. 8 for being underweight saw the No. 12 Ford Mustang move up to P7 on the starting grid. The No. 17 started on the front row in P2.

In a field where 10 main drivers and 15 co-drivers were in the hot seat for the start of the 161-lap race, McLaughlin and D'Alberto took on driving duties for DJR Team Penske in the first stint.

McLaughlin had a great start off the line and moved into P1 as he approached the first corner. Wheel spin contributed to D'Alberto losing five places off the start line. There was also a nervous moment on the opening lap for D'Alberto as Brown made contact with the rear of the No. 12 heading into The Chase. But D'Alberto wasn't fazed and pressed on. 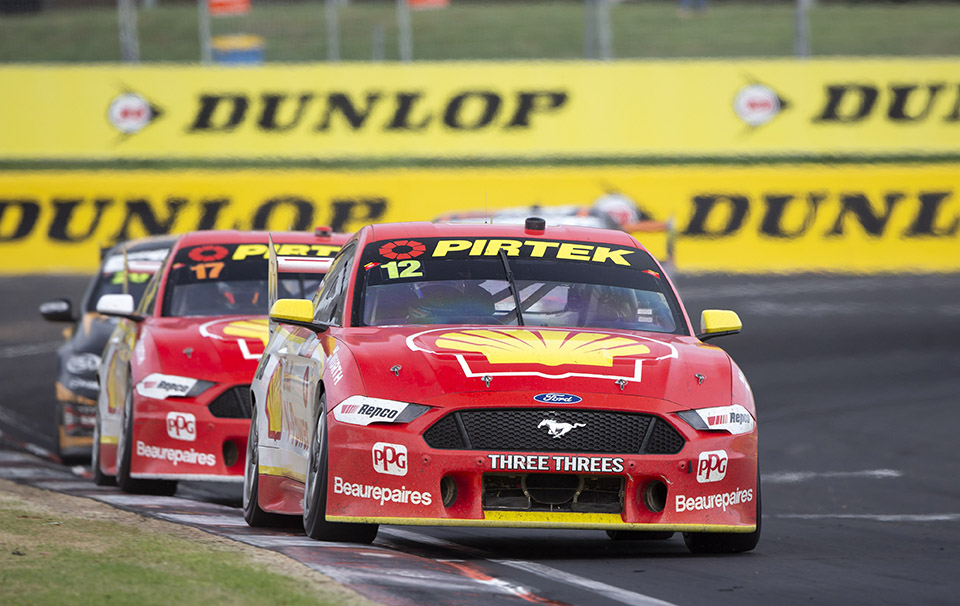 The first safety car came on lap 33 when Whincup went into the wall at turn 3. Although this was an unfortunate moment for Whincup, this meant DJR Team Penske’s chances at securing the Teams' Championship significantly improved. Both D'Alberto and Slade took advantage of the safety car and pitted. Slade stayed in the car but returned to the race in P2 behind Waters because he took on more fuel. D'Alberto handed over his Mustang to Coulthard who rejoined the race in P8. 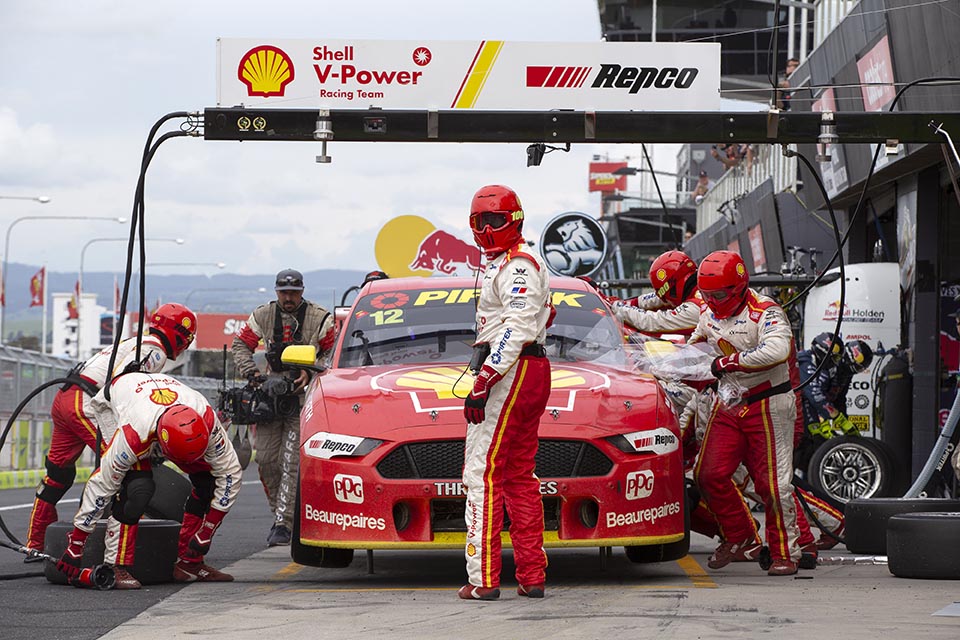 As Coulthard was coming in for the No.12's third stop, car No. 14 went into the wall at the last corner and a second safety car was called. The timing worked to the team's advantage because Slade was able to stop under the safety car without having to double stack as Coulthard had cleared the pit bay. Slade handed the reins back to McLaughlin who returned to the race still in P2. Coulthard was up two places P6. 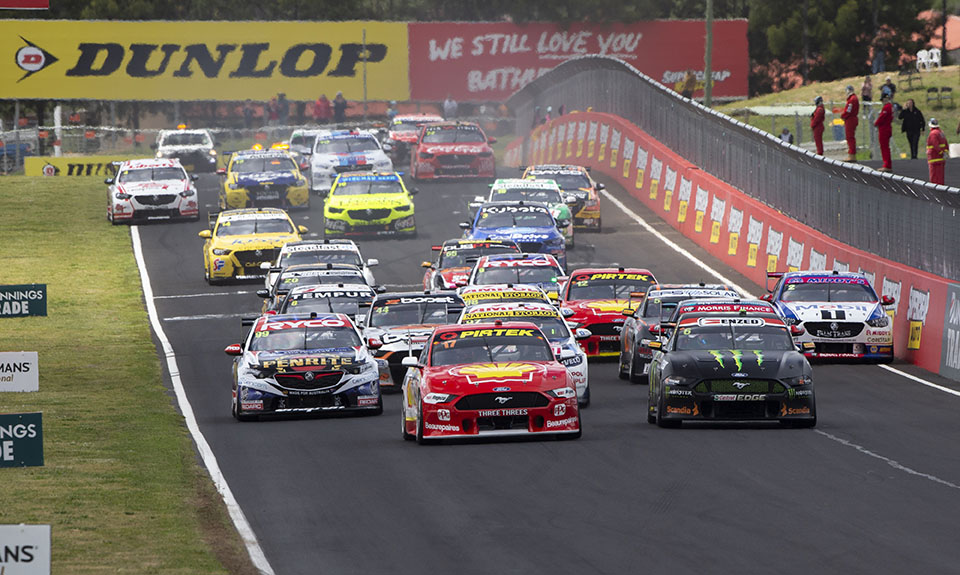 At the restart on lap 54, threatening clouds had gathered, and rain started to fall. With the field on cold, slick tyres, it was a recipe for disaster. But despite the treacherous conditions, Coulthard managed to move up two places to P4. McLaughlin struggled with grip and dropped down two spots to P5. The rain cell went as fast as it came, and it was business as usual as the track dried out.

At the half-way point of the race, both cars had completed four stops, and it was Slade and D'Alberto in the driver's seats. They were P2 and P4, respectively. They were focussed on saving fuel to ensure they could complete the minimum number of required laps and make it to the next pit stop window.

A safety car was called on lap 98 when two Brad Jones Racing cars came together. It was an inopportune point in the race for Slade who was two laps shy of his required laps. He was the lead DJR Team Penske car so pitted first but had to stay in the car for another stint. D'Alberto was forced to double-stack which saw the No.12 drop to P6 when it rejoined the race. D'Alberto had completed his required laps and handed the car back to Coulthard for the last stint of the race. 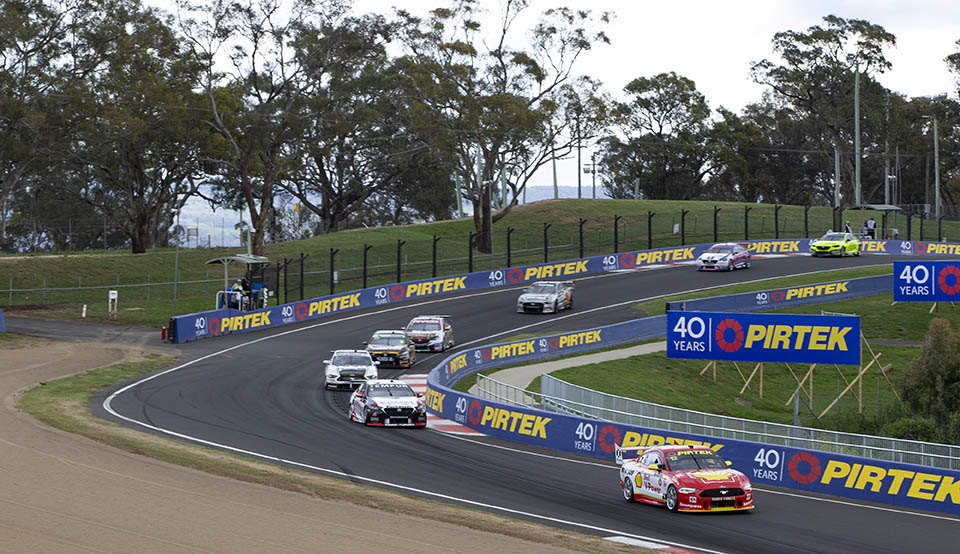 Slade was in P5 when he brought the No.17 for McLaughlin to take over. He had done a mighty job having done 71 laps, and he returned the car straight and in good condition. However, the No.17 was 15 seconds off the lead and had some ground to make up. With 41 laps to go, McLaughlin made his way back up to his teammate who he passed as Coulthard came out of pit lane.

McLaughlin made his critical final stop early on lap 138 as he had to stop for fuel. The team hoped the undercut might also work to his advantage. McLaughlin took on a full tank and fresh tyres so he could go flat out to the end. 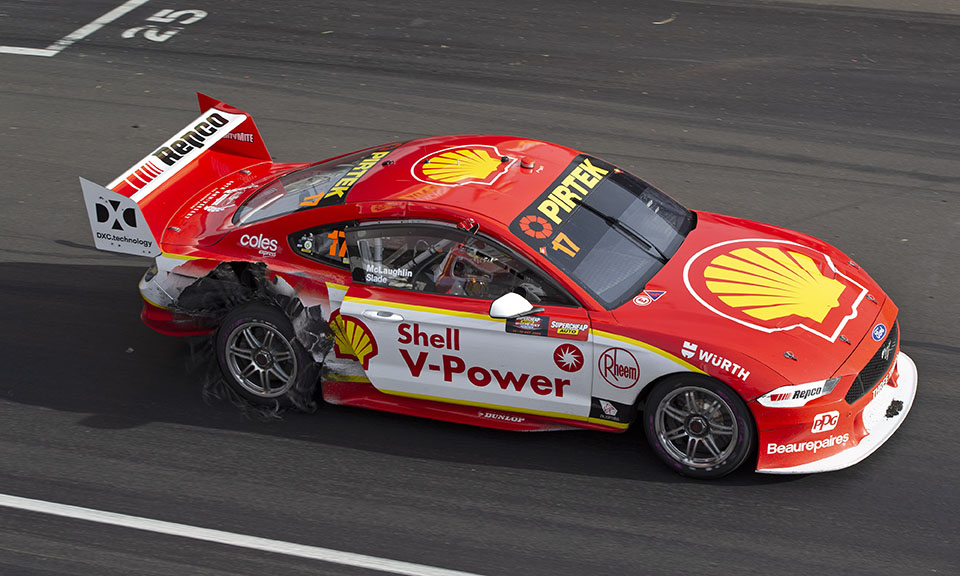 Coulthard made his final stop with 19 laps to go and returned in P4. His teammate was one spot behind, but they had a gap of 25 seconds to the lead. A late safety car was called with just 9 laps remaining when cars No.4 and No.2 both crashed in separate incidents. The race restarted with only 6 laps to go but didn't get through one lap before car No.34 crashed and stopped in the run-off zone at Skyline. Another safety car was called.

With 3 laps to go the race started once again but the top three had too much pace for the DJR Team Penske drivers to catch them. Coulthard/D'Alberto finished in P4 and McLaughlin/Slade one place behind in P5.

DJR Team Penske claimed the Teams' Championship title meaning they will once again occupy the first two garages in pit lane in 2021.

McLaughlin was officially crowned the winner of the Driver's Championship and Coulthard finished the 2020 season P6 overall.

D'Alberto continued, “It was a great day, and Fabian did a fantastic job, especially when it rained. He came through the field and got right to the front of the field. Unfortunately, it didn’t work out at the end with the double-stack, but our pace was fairly solid.

“To come away with a fourth, you can’t help but be a little bit disappointed, but we’ll come back next year and give it another crack.

McLaughlin added, "First off, congratulations to Shane and Triple 8 racing for their win, they were faultless all day. I’m proud of everyone at Shell V-Power Racing because it’s been an awesome year. It’s been hard for a lot of teams including ours, but I’m just proud to bring home the bacon.”

“I think the camaraderie between the teams has been the most enjoyable thing this year. Last year it was pretty full-on, tit-for-tat, but this year everyone knows how hards it’s been for everyone, and there’s been a lot of good, hard racing.”

“It’s probably the best racing we’ve ever seen, and we probably had the most at stake because we didn’t have the turn around times to come home and fix the cars. Especially the Victorian teams. A credit to those teams for the sacrifices they made for the sport and also to the volunteers who’ve kept the sport going. I wouldn’t be in this position if we didn’t have great people in our sport, so I’m really proud of that.”

Slade said, “I did more laps today than planned, it was just the way the safety car fell and that was frustrating. I was comfortable enough in the car but probably not enough to do the number of laps that I did. I was hurting, but I managed to press on.”

“It was a really enjoyable weekend with the team, I just wish we had the other couple of races because it would have been cool to do some more racing with the team.” 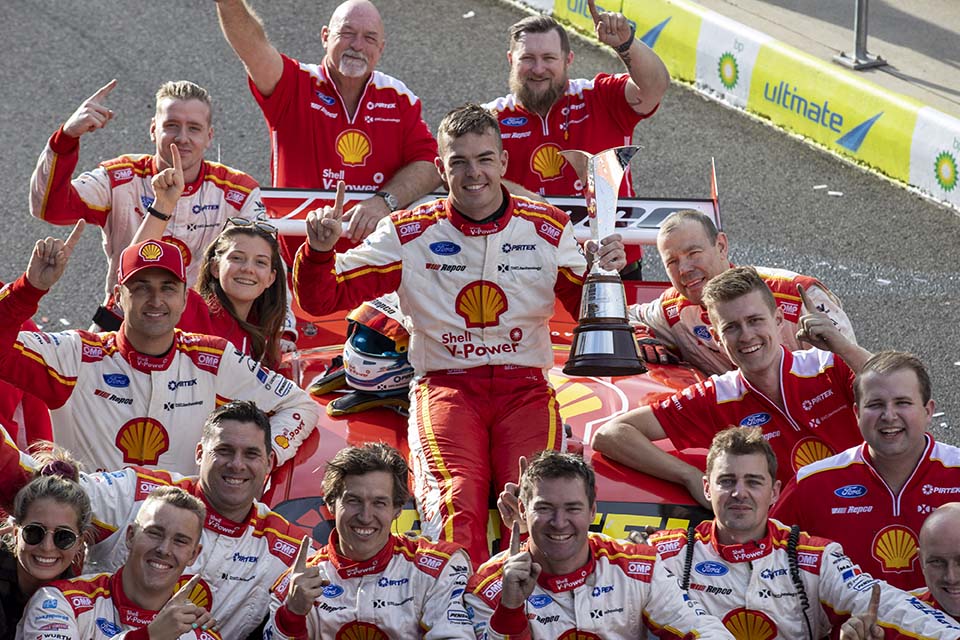