Will Davison scores his first podium for the DJR Shell V-Power Racing Team in Race 1 of the 2021 Repco Supercars Championship at Mt Panorama, Bathurst. 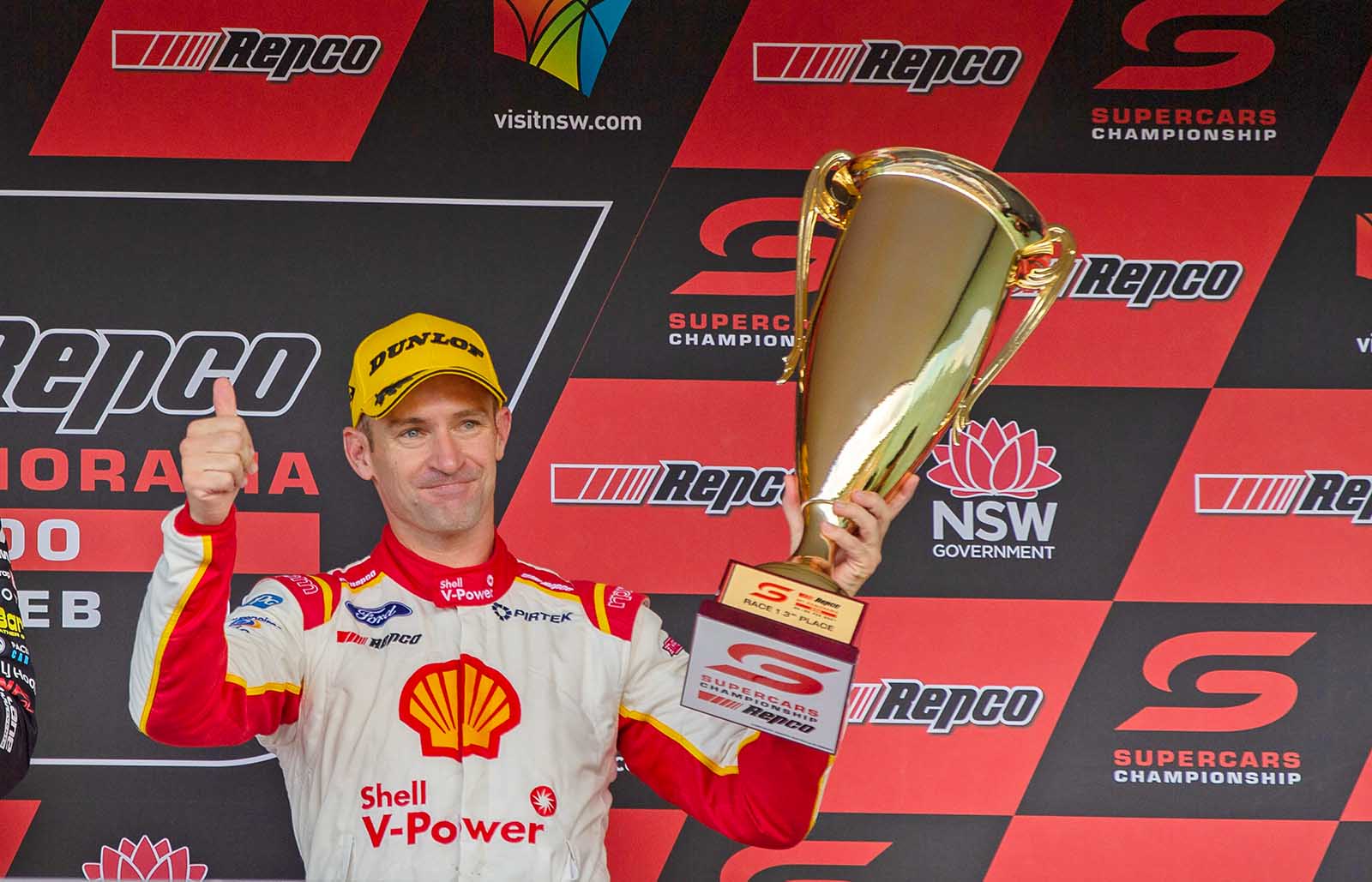 The highly anticipated start of the 2021 Repco Supercars season was met with celebration and heartbreak for the Pirtek-backed DJR Shell V-Power Racing Team. Will Davison claimed a podium position, but teammate Anton De Pasquale hit the wall at The Cutting and was unable to finish the opening race of the season.

The first session of the day was a 20-minute qualifying where De Pasquale clocked the fastest time, and Davison finished P7. This saw them both progress to the Top Ten Shootout. De Pasquale was less than two-tenths behind the quickest car, clocking a shootout lap time fast enough to put him in P4. Davison was just one position behind in P5.

The duo both had a textbook start to Race 1, with De Pasquale moving up to P3 and Davison P4 on the opening lap. The field settled into a rhythm as they carefully navigated their way around the mountain in the first stint.

On lap 6, De Pasquale made contact with the wall as he made his way through The Cutting, which caused a yellow flag and the safety car to be called to the track.

Davison used this opportunity to make his first pit stop, as did most of the field. He lost one position to Slade in pit lane and rejoined the race in P4. Davison reported he was struggling with grip during his second stint but kept within four seconds of Slade while holding off Mostert who was chasing him. 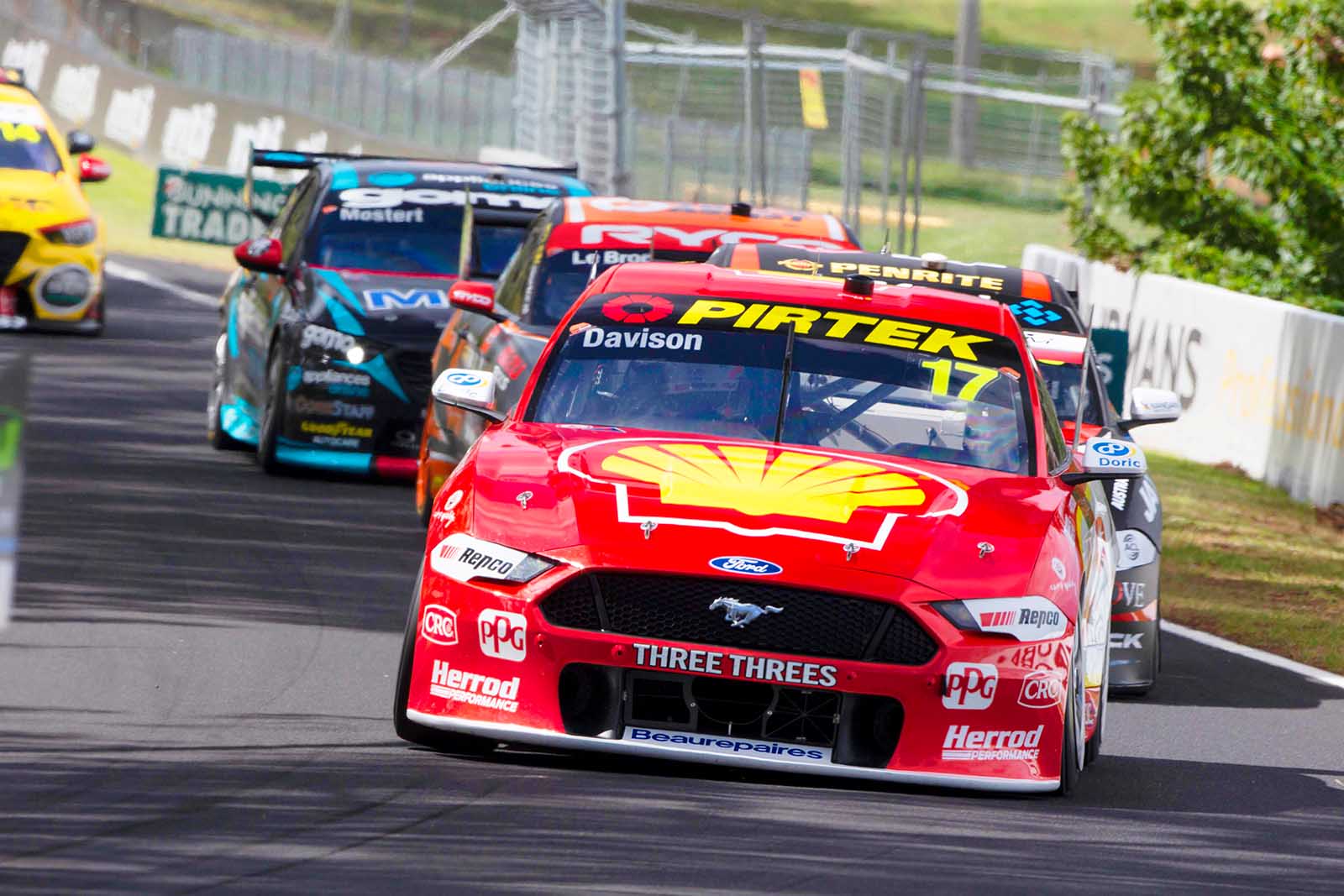 Davison made back the position he lost to Slade while making his final pit stop. With all pit stops completed and 10 laps remaining, Davison was in P3 with Slade just 0.6 seconds behind him.


In the dying stages of the race, Slade hit the wall at Forrest Elbow which left Davison 12 seconds clear of his next rival. He cruised home to claim the Shell V-Power Racing Team’s first podium of the season. The finish sees Davison placed 3rd in the Drivers’ Championship with 139 points. De Pasquale was a DNF.

De Pasquale commented, “Physically, I’m feeling fine. But obviously it’s a big hit for me because I threw away what was potentially going to be a good result. That’s a shame because the car was pretty decent. I was probably just pushing it too hard early on, trying to hang with the guys at the front.”

“We’ve turned around a car that I was struggling with yesterday. We had a really good qualifying and a decent shootout result today. The team did their job, I just didn’t do my job bringing it home with the points, but I’ll try and get a trophy tomorrow.”

Davison added, “I very, very happy with the way things kicked off today. I couldn’t ask for more getting a podium. I got better every session with seventh in qualifying, then fifth in the Shootout, and up to third in the race.”

“I’m learning a lot, and that was the aim of the whole weekend, but it’s been a dream debut for me at this team. Now I’ll just keep my head down and focus on going to be better tomorrow.”

The DJR Shell V-Power Racing Team had a solid day of racing as Race 2 wrapped up at Bathurst. Bouncing back from a DNF in yesterday's race, Anton De Pasquale finished P4 and Will Davison P6 in Race 2 of the Repco Supercars Championship.

It was a second-row lockout for the start of the 250 km sprint around the mountain, with De Pasquale and Davison again proving their pace by Qualifying P4 and P5 and progressing to the Top Ten Shootout. De Pasquale had the advantage of contesting the Shootout on green tyres, and even though Davison was on used tyres, he still put together a stellar lap to finish one place behind his teammate. They started P3 and P4 for the final 40-lap hit-out of the weekend.

Davison was slightly slower off the start line than his teammate and had to work hard to hold off Mostert on the way up the mountain. Both DJR Shell V-Power drivers held their positions, but Mostert did not relent on trying to pass Davison during the opening lap. He continued to closely stalk him and finally made his move on the third lap at turn 1.

Courtney hit the wall at The Cutting on lap 9, and while damage was significant, it was not enough for a safety car to be called. As car No. 44 limped back to the pits, both De Pasquale and Davison remained out on track and continued to push on until Davison pitted on lap 11.

De Pasquale remained in the battle pack in P3 for the opening stint's duration before making his first stop for fuel and tyres on lap 14. He returned to the race ahead of Mostert but lost his position after a small lock-up at The Chase while trying to defend against him.

The No. 100 and No. 17 Ford Mustangs trucked along consistently and uncontested in the middle stint in P4 and P5. Davison pitted on lap 22 for a long fuel stop and tyres, and De Pasquale followed suit on the next lap. With their final stops completed, they rejoined the race still positioned behind van Gisbergen, Waters and Mostert, and focussed on the final 17-lap stint home.

Davison was held up by lapped traffic, so was undercut by Winterbottom and pushed back to P6. Then lost the rear at the final corner and was passed by Whincup with just 10 laps remaining. The duo finished in the top seven, with De Pasquale passing the chequered flag in P4 and Davison P7 – a solid result for the team in the opening round of the season.

De Pasquale, on the race: "When I came back out this morning, I obviously wanted to make up for yesterday, so it was great to get back in the Shootout. Then to be on the second row of the grid for the start of the race was pretty good."

"Yesterday the car was fast enough to be in the top five, and we had similar pace today. So, fourth place was good. In the race, we were kind of on our own, just a bit slow to the guys in front and just had an edge on the guys behind."

"Now we'll go home and look at everything and get ready to go again at Sandown."

Davison added, "I'm really happy to leave here with a good haul points. Today we showed really good glimpses of speed, and to have the opportunity to learn as much as we have this weekend is absolutely priceless."

"Over the weekend, I've been able to learn so much about the car and the team, and to come home with 225 points is a great result."

"I made a couple of little errors today, nothing major, really trying to understand the car, but we've made a lot of changes which is good. Now we can just build on this and look forward to Sandown."