Anton De Pasquale tops both Practice sessions at the Sydney SuperNight ahead of Qualifying, Top Ten Shootout and the Races.

After 100+ days, the DJR Team returned to racing at Sydney Motorsport Park. The allocated tyre for the weekend is the Dunlop Soft tyre. 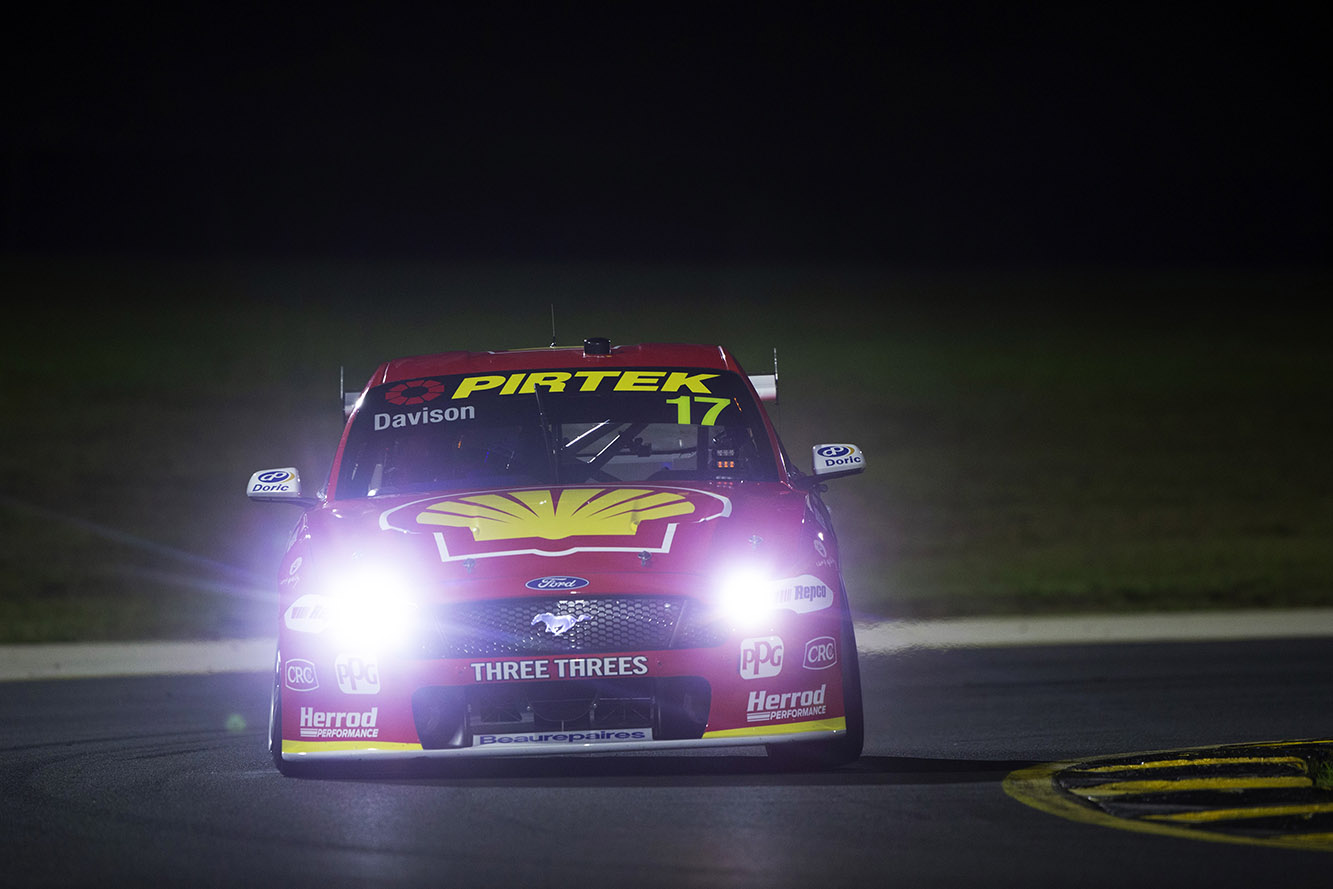 Both the Shell V-Power Racing Team Ford Mustang GTs were fitted with brand new green tyres. De Pasquale set the quickest lap early (1m31.812s). De Pasquale and Davison both completed four laps in their opening run before coming back to the garage to make adjustments to the cars.

With 5 minutes remaining in the session, Davison made one final stop where the crew to the garage for green Soft tyres and make adjustments to the car.

The crew did one final change on De Pasquale’s car, along with green Soft tyres and sent him back out with just over 2 minutes on the clock. De Pasquale finished the session with the quickest time (1m31.392s) in Practice 1 while Davison, finished P9.

After a 3-hour break, we were back on track for a twilight 30-minute Practice session. In similar style to the first session, the Shell V-Power Racing Team Ford Mustangs were fitted with used tyres for a short three lap warmup.
De Pasquale and Davison retained the same set of tyres for their second stints.
Davison had steering issues during Practice 2
For the final hit-out of the day, both cars were fitted with a set of green tyres. De Pasquale topped Practice 2 and Davison in P22.

De Pasquale said, “We need to put our best foot forward and starting off on the right, so hopefully we can keep that going forward and have a battle under lights and put on a good show and get back into racing.”

Davison added, “Unfortunately, from our side we had issues with the steering, so we were in and out of the garage trying to fix it, but we weren’t able to get any decent running. We think we’ve found what the problem is now. We will see how we go tomorrow, I am confident we will be much better tomorrow.”

Anton De Pasquale started the 125km sprint race in P1, and teammate Davison started just behind him in P3. Both drivers retained their positions into turn 1, until Davison was wide at turn 6 and dropped to P4.

Davison was the first Shell V-Power Racing Team Ford Mustang to complete his compulsory pit stop on lap 15. The crew serviced him with two used tyres on the right side only. Davison rejoined behind Reynolds.

De Pasquale stopped for his compulsory put stop one lap later for two used tyres on the right side only. De Pasquale rejoined the field in P1.

De Pasquale ran home with it to finish in P1 and Davison finished in P7. 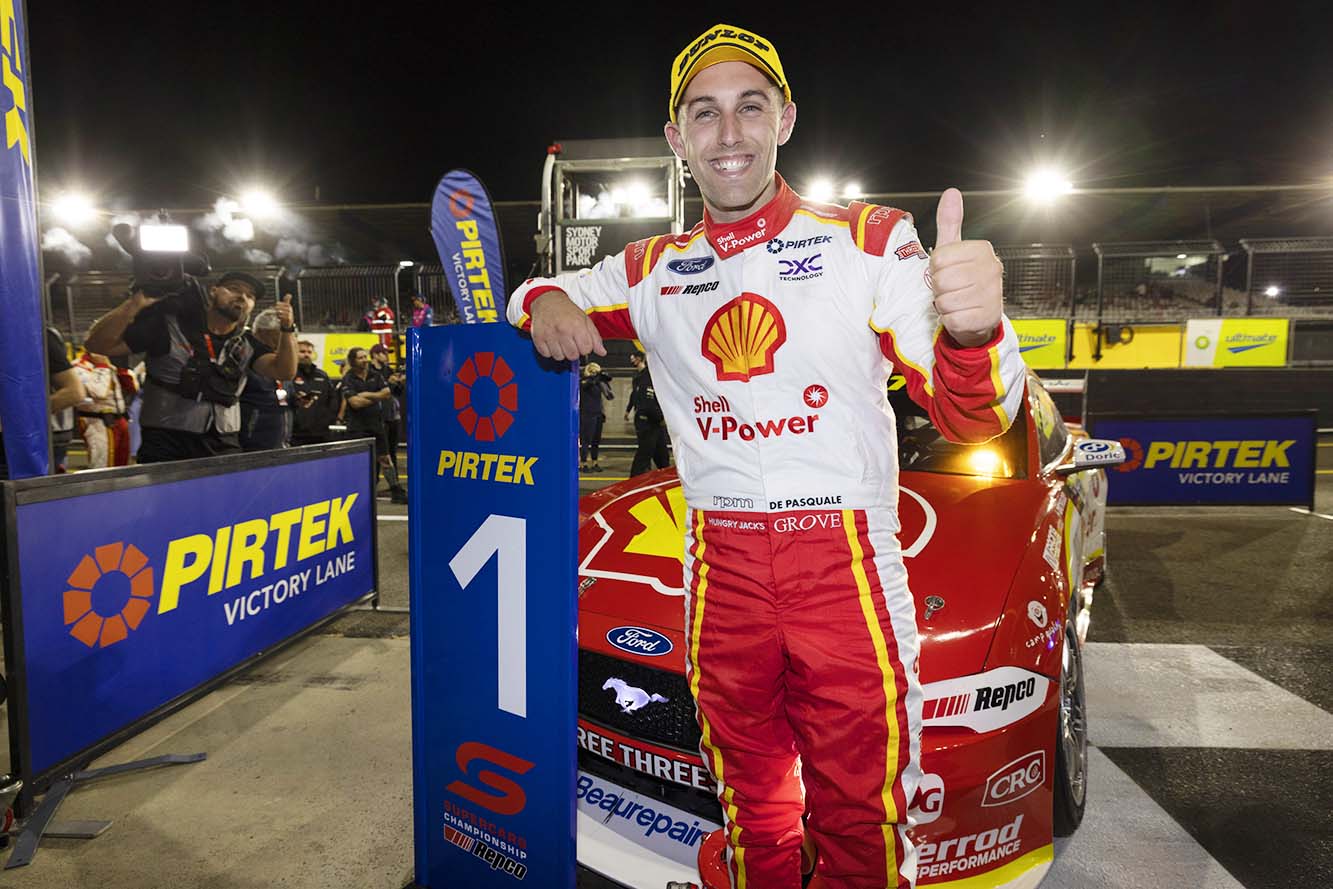 De Pasquale noted, “Good to convert the pole position, we’ve had a couple get away from us this year. To have a smooth day is good. It’s converting the races which is really what we want, so to get one of those straight up after the long break.”

Davison said, “Obviously a big turnaround from yesterday, we will take the points today and take the positives. We’ve got a really good platform to work from now for tomorrow, which I’m optimistic about.” 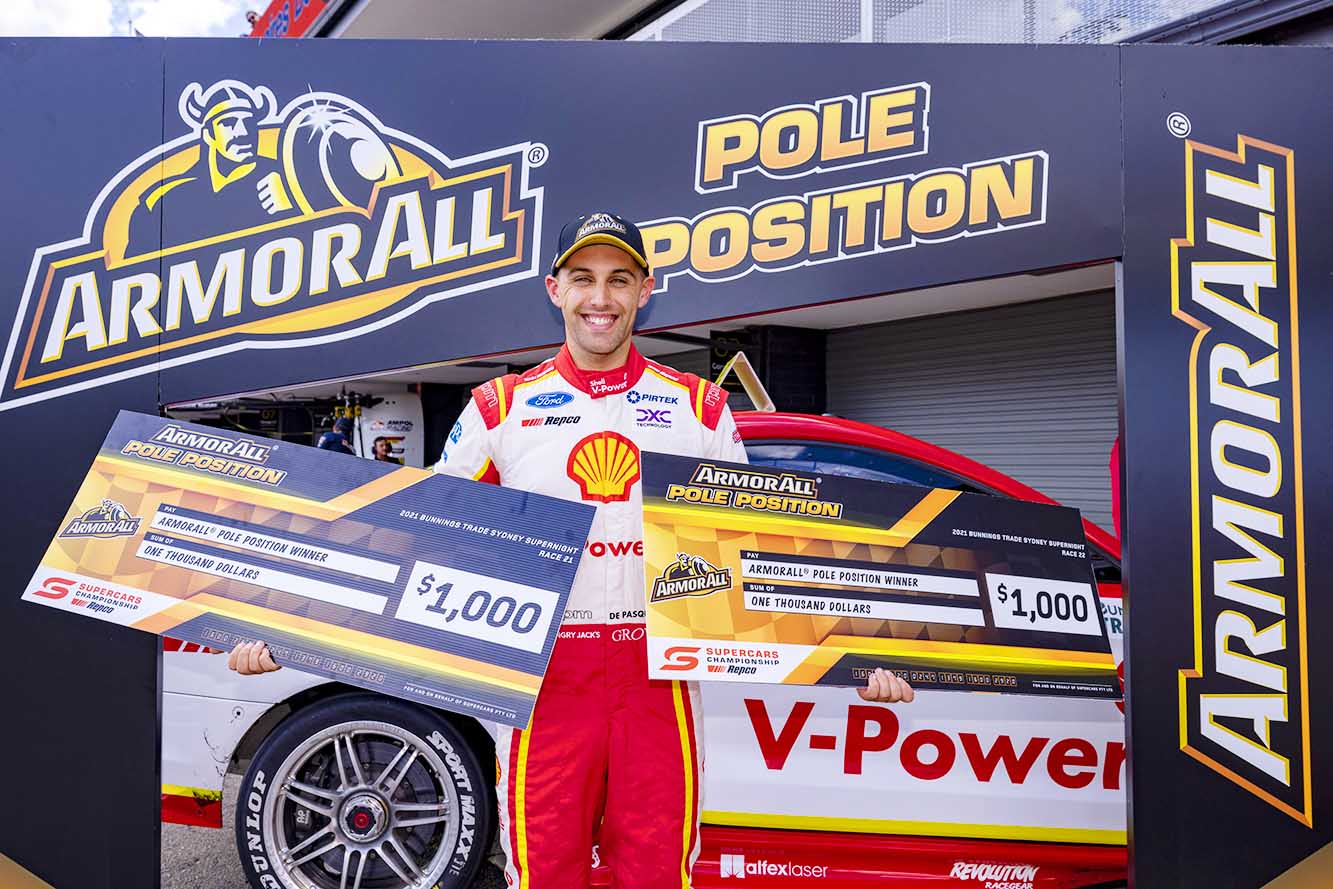 De Pasquale was the first Shell V-Power Racing Team Ford Mustang to complete their compulsory pit stop on lap 8. The crew serviced De Pasquale with two right side only used tyres. Davison took his compulsory pit stop on lap 19 and was serviced with four used tyres. Davison was jumped by van Gisbergen on release, but only took on three tyres compared to Davison.

During Race 21, Davison experienced an electrical issue with his dash where he lost all power and had to complete a restart of No. 17 on his pit stop on lap 19. 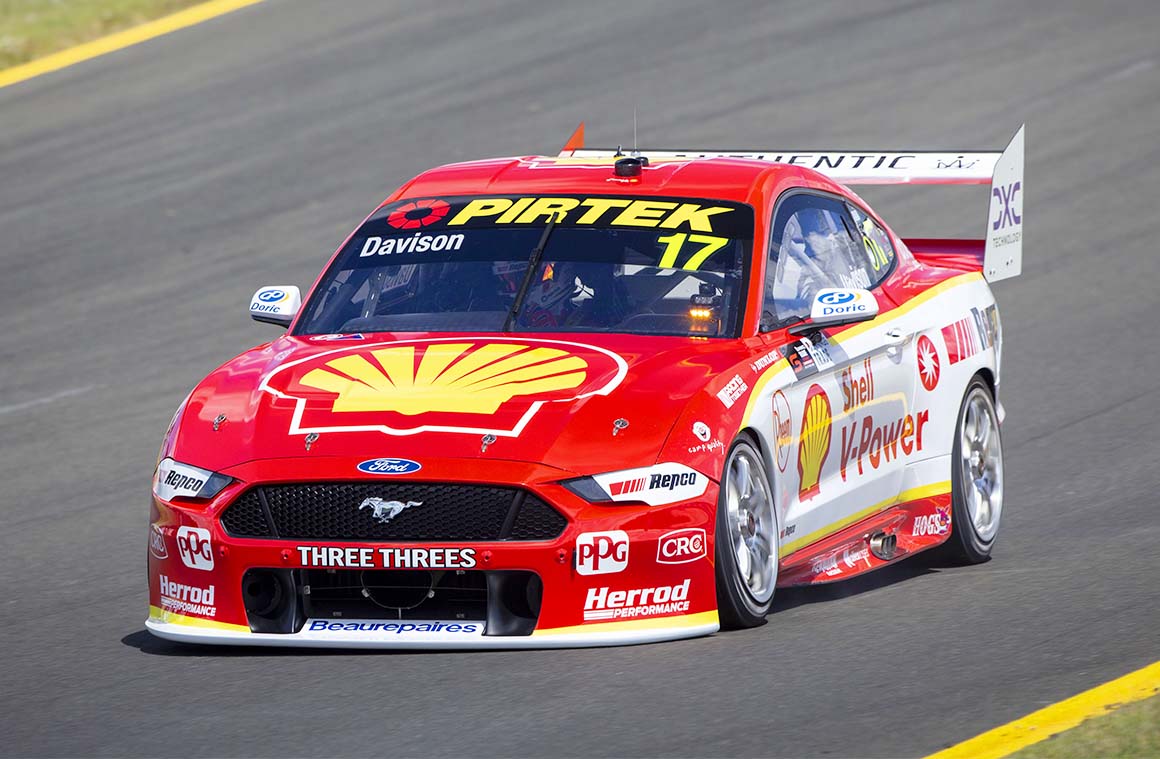 After the completion of Anton De Pasquale’s compulsory pit stop in Race 21, we became aware of a mistake made during this pit stop, with the wrong tyre being put onto Anton’s No. 11 Shell V-Power Racing Team Ford Mustang. This was a mistake that didn’t bring any sort of advantage to Anton, however, as soon as we became aware of this, we notified Supercars accordingly.

Knowing the consequences, we accept them and after what has been an otherwise very successful return to racing for the Team this weekend.

Davison finished Race 21 in P2 and unfortunately for De Pasquale was excluded from the second race.

The final 125km Sydney event started with De Pasquale claiming this third straight pole award for the weekend and teammate Davison starting the race from P6.

De Pasquale got a better start than Race 21 and retained P1 into turn 1. Davison also got a good start and was able to jump up to P5. 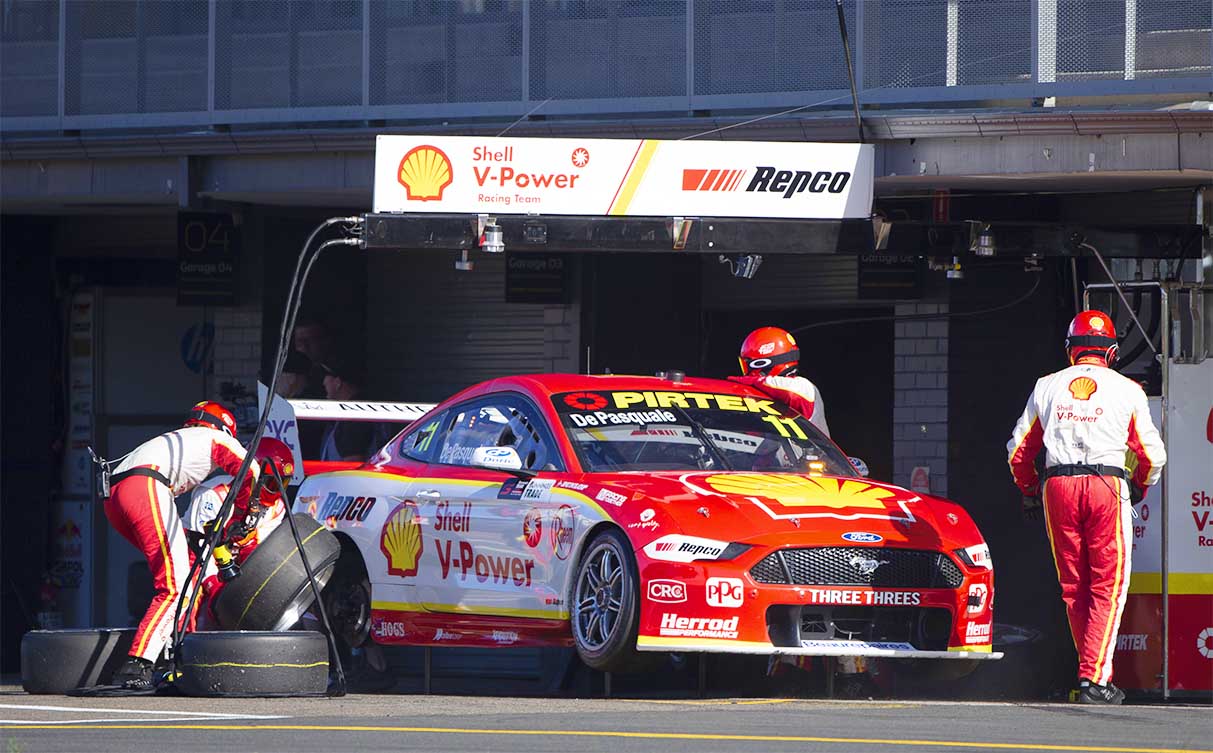 After the completion of all compulsory pit stops De Pasquale sits P1 and Davison sits P3 after 18 laps. One lap later, van Gisbergen who had an additional new tyre from his stop was able to pass Davison for P3. Few laps later Whincup caught up to Davison to drop him to P5. 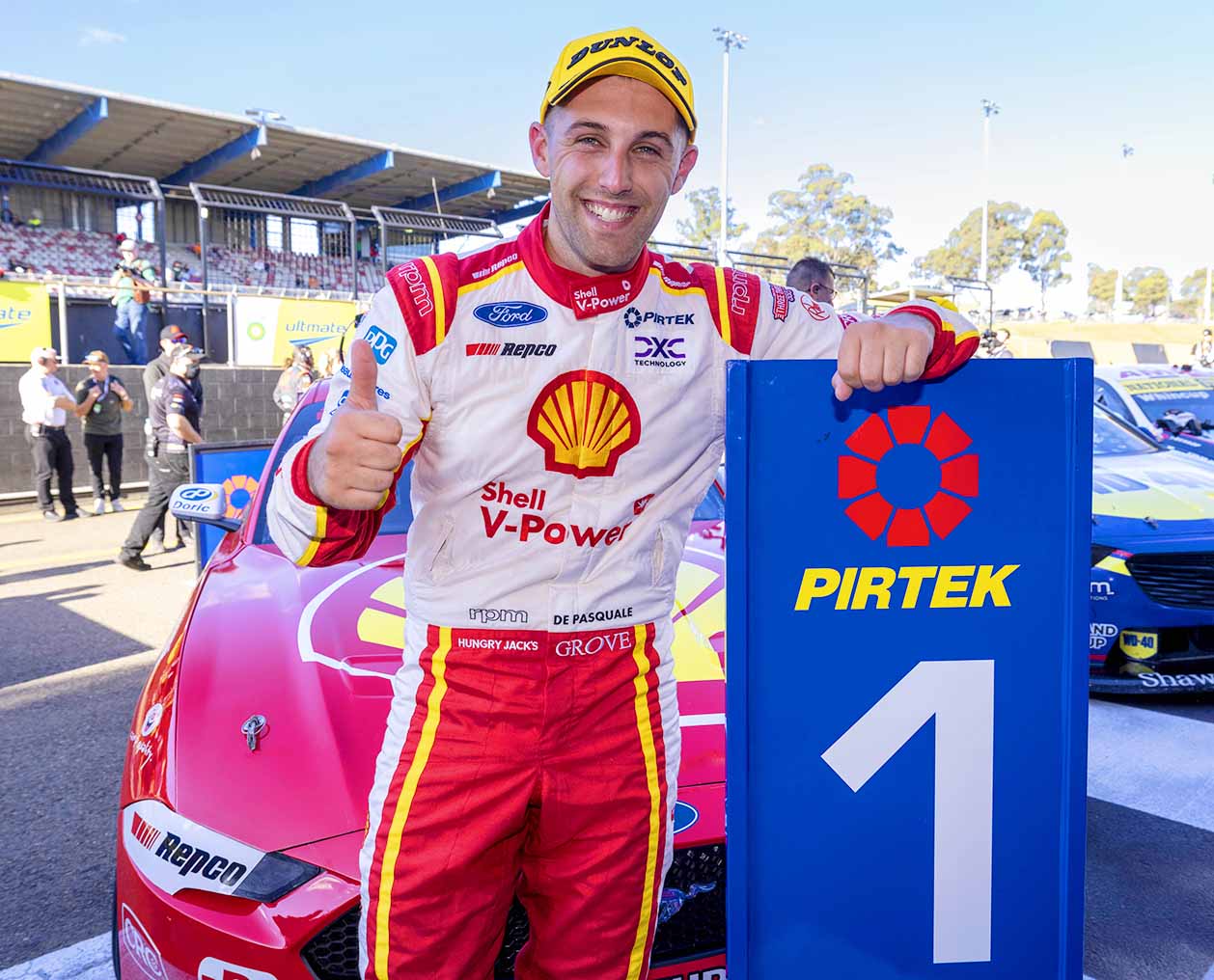 
De Pasquale added, “The car rolled out of the truck really well and the guys did an awesome job in that break, just getting everything spot on.

It was cool to execute a couple of race wins this weekend after starting from pole position. I am looking forward to more racing over the next three weekends.”

Davison said, “Obviously very disappointed with today’s first race, we put everything into that one and got a good start and we somewhat had it in the bag. I’m pretty gutted to have an electrical issue that you just never have so the timing couldn’t have been worse, but that’s motorsport.

The missed opportunity earlier this morning hurts a lot, but that’s a good thing because I am really hungry to get that win.”