Will Davison started the 32 lap, 125km night race from P4, and teammate De Pasquale started from P26 after an unfortunate gearbox issue during Qualifying forced him out of the session altogether. Every race this weekend requires each car to use the Dunlop Soft tyre and Dunlop Hard tyre. 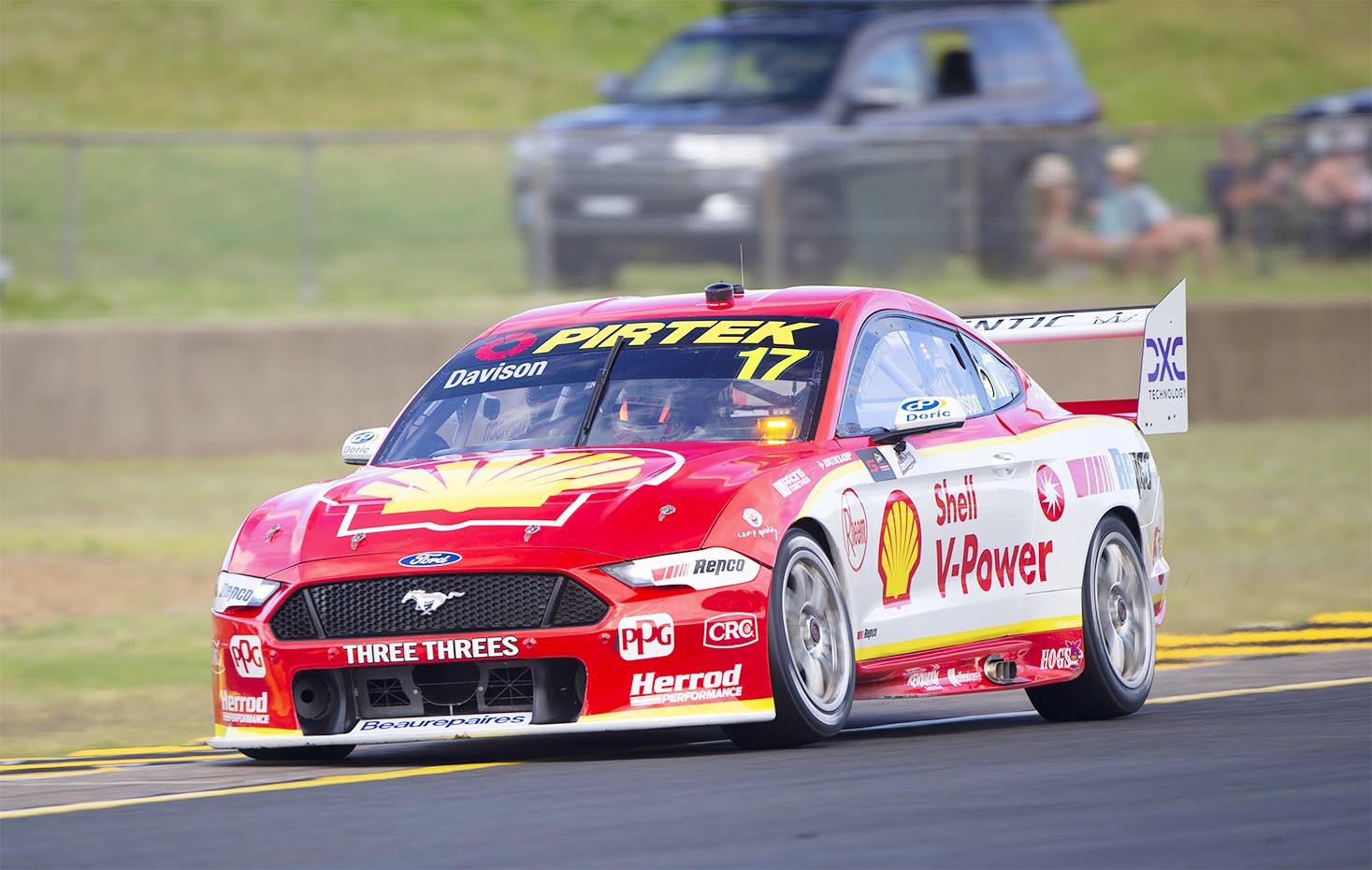 Davison and De Pasquale started the race on the Hard tyre compound. Davison got off to a strong start but was pushed wide by van Gisbergen at Turn 1 and 2 dropping him to P6 on lap 1. De Pasquale was able to gain four positions on lap 1 to P22.

Pye passed De Pasquale on lap 29 for P12. De Pasquale passed Brown and Mostert late in the race for P11. 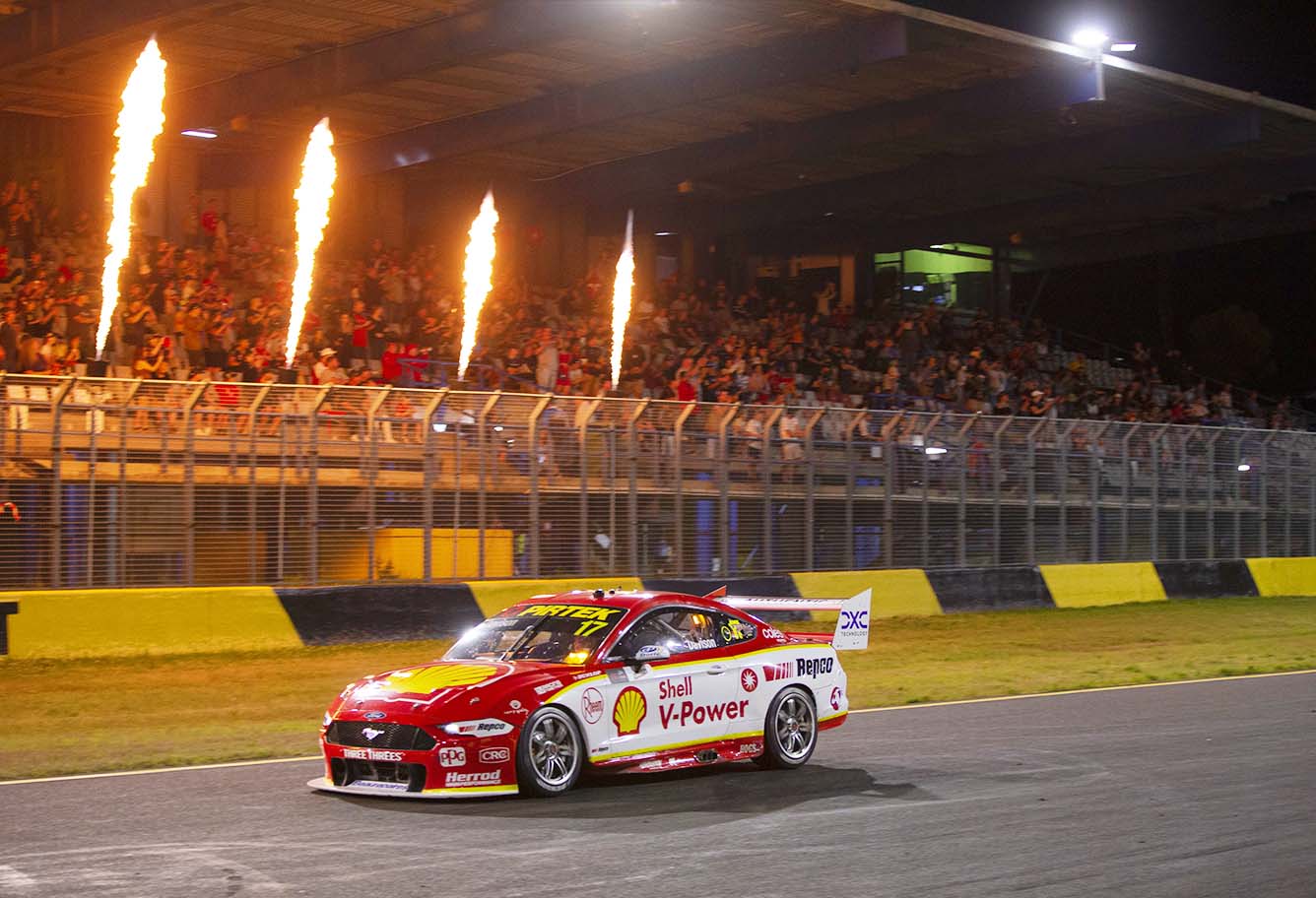 De Pasquale added, “Carried over last week into practice today and then had a gearbox drama in qualifying today and wasn’t able to do a lap at all. I had to start last, which is obviously not ideal, you’re a fair way on the back foot. During the race, we tried to get as high as 12th.”

Davison went on to say, “Pretty tough race for me, it was good to hang on for third. It was a tricky race for me, with a pretty tricky opening stint and then we went with an aggressive strategy stopping on lap 5. Just tried to hang on and had a tough battle with Percat.”

Double podium finish for De Pasquale on a wet day in Sydney. Teammate Will Davison finishing 4th in Race 24 and 7th in Race 25.

De Pasquale started Race 24 from P1 and teammate Davison started from P5. After a wet Qualifying session, the rain cleared for the start of the race. De Pasquale and Davison started on green Dunlop Soft tyres. The slippery conditions forced De Pasquale wide, off the greasy line forcing him to drop to P2 behind van Gisbergen. Davison had a good start but got caught up in a battle pack and dropped to P7 on lap 1. 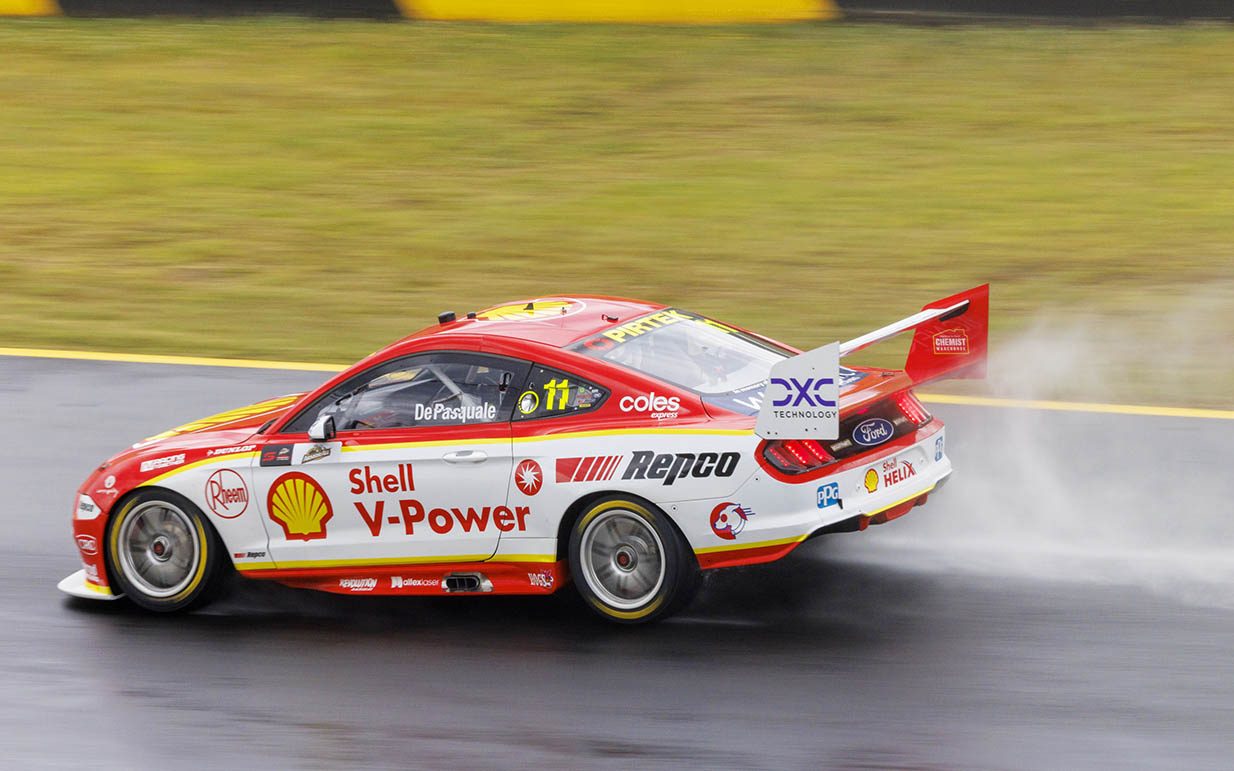 With the mixed tyre compounds being used this weekend, De Pasquale and Davison regained their starting positions by lap 3.

Davison was the first Shell V-Power Racing Team Ford Mustang to complete his stop on lap 20. The crew serviced Davison with four green Hard tyres. De Pasquale was the last car in the field to stop on lap 24 and he was serviced with four green Hard tyres to finish the race with. At the completion of all compulsory pit stops, De Pasquale sits in P1 and Davison sits in P4.

The weather threatened to rain during most of the race, with a few drops falling late in the race, however, not enough to cause any late stops for the Wet tyre.
De Pasquale finished Race 24 in P1 and Davison finished in P4.

De Pasquale qualified in P3 and Davison in P6 for Race 25, however, due to a penalty handed down to Mostert post Qualifying, they started P2 and P5 respectively. The race started with light rain, resulting in slippery conditions across the track. De Pasquale and Davison started the race on green Wet tyres, as did the rest of the field. De Pasquale and Davison didn’t have the best start to the race, both dropping one position each. In the opening lap B. Kostecki and Courtney collided causing an early Safety Car.

On lap 6, the field was released by the Safety Car and van Gisbergen ran wide at turn 1, resulting in De Pasquale jumping to P3 and Davison to P4. Fullwood received a pit lane drive through penalty on lap 7, which saw De Pasquale and Davison gain a position each to P2 and P3 respectively. 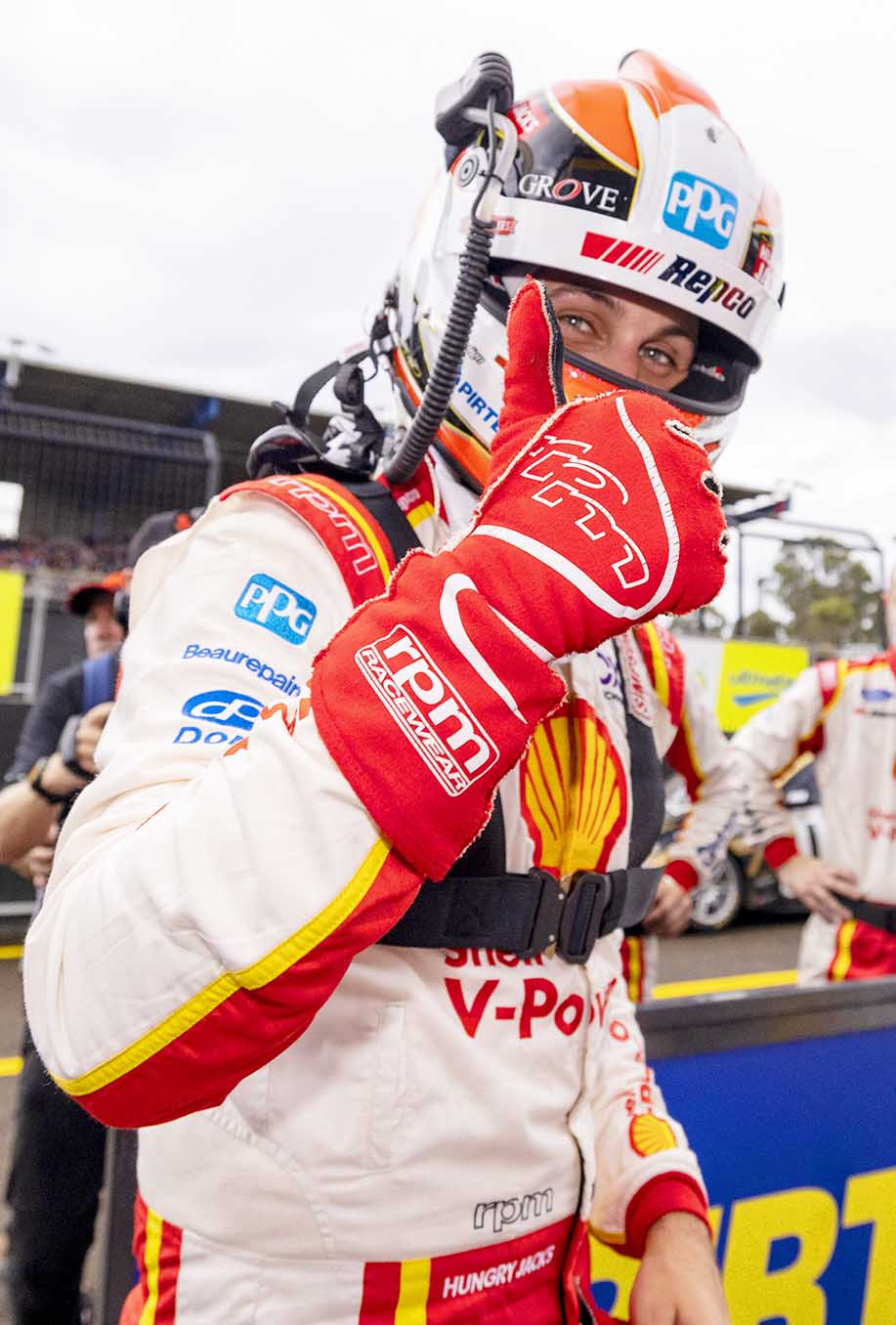 Davison was the first Shell V-Power Racing Team Ford Mustang to complete his compulsory pit stop on lap 19. The crew serviced him with four green Wet tyres to finish the race on. De Pasquale quickly followed his teammate stopping on lap 20 for four green Wet tyres. 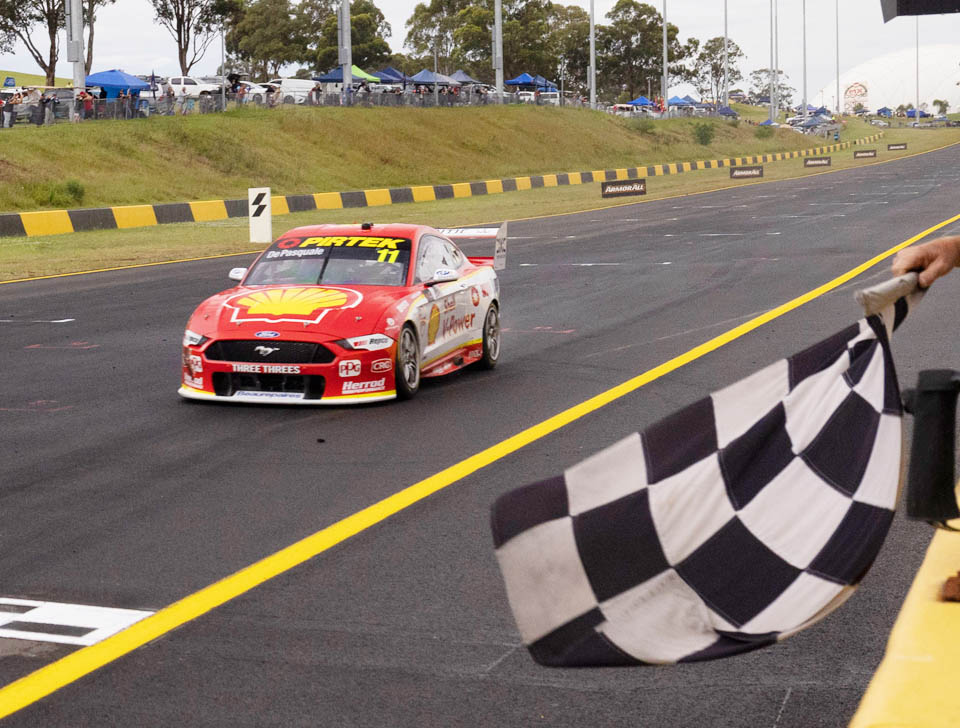 De Pasquale said, “It was pretty sketchy out there when the Safety Car got called, it started bucketing down and getting pretty wet.

In me wanted to try to go again and fit for it but, it was on the verge at two or three corners. Most of the track was alright, two or three were pretty bad with rivers across the track and you become a passenger for part of the corner and you never want that.

It’s always fun in these conditions cause these cars are quite fun to drive in under these conditions, a lot of mental energy put in to do it. It’s cool, I’ve never done any wet weather racing around here and I didn’t mind it. We might get a bit more next week by the looks of it, it’s good practice.”

Davison added, “I’m glad to get a solid haul of points this weekend, I still haven’t quite had the weekend I’m after.

We’ve taken some in-roads in understanding what we need to unlock for me. All in all, a positive weekend with a good amount of points.”