Two left in the fight for PIRTEK Enduro Cup 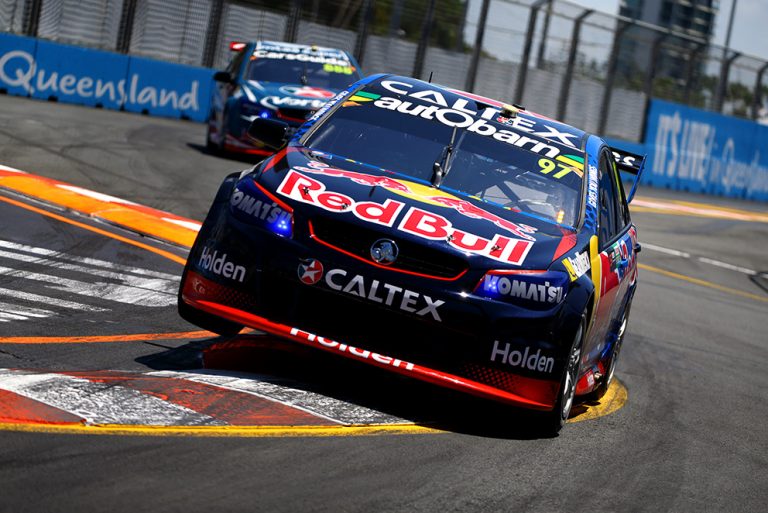 Shane van Gisbergen and Alex Premat have placed themselves in the box seat for the PIRTEK Enduro Cup after an against the odds victory for the Red Bull Racing Australia duo in the first race of the Castrol Gold Coast 600.

The RBRA duo stand to be the first internationals to have won the PIRTEK Enduro Cup – however the only other combination in with a shot at this stage are Bathurst 1000 victors, Will Davison and Jonathon Webb – who sit 87 points behind the Kiwi and Frenchman.

van Gisbergen and Premat overcame a 10 second penalty handed to them due to a Safety Car infringement to take yet another win, which also coincided with van Gisbergen’s 100th pole position.

The race hit drama late in the race when Fabian Coulthard slammed the wall after a collision with Garth Tander cannoned the DJR Team Penske Ford into the fence with just six laps left to go.

Officials were able to clean up the remains of Coulthard’s Falcon and set up a Green, White Chequer finish.

The hard charging Scott McLaughlin (partnered with David Wall) threw everything at van Gisbergen in the last two laps but was not able to get up onto racing terms with him.

Leaders of the PIRTEK Enduro Cup coming into this weekend, Jonathon Webb and Will Davison were stricken with a puncture under the final safety car.

In third placing was Jamie Whincup and Paul Dumbrell in the Red Bull Racing Australia #88.

It was van Gisbergen’s third Saturday win in succession on the Gold Coast.

Tomorrow, qualifying will be followed by a top 10 shootout then another 102 lap torture test.